Email ThisBlogThis!Share to TwitterShare to FacebookShare to Pinterest
Labels: alice cooper, bedtime for robots, reanimator, the mugshots, wolfmen of mars 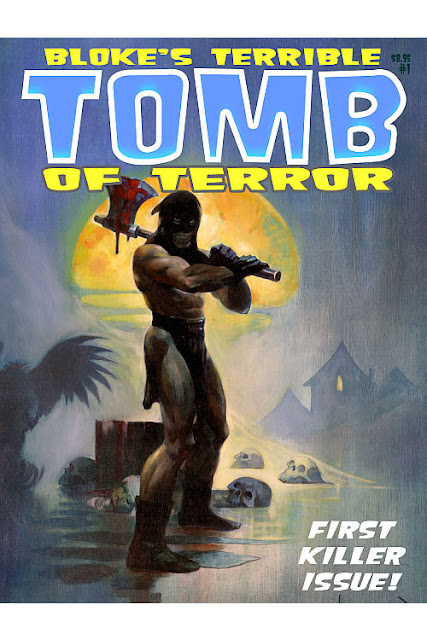 My comics collecting really began when I was given a large box of random 60's and 70's comics when I was in 3rd grade. The box was chock full of anthology comics from Charlton and DC, like Weird War, Ghosts, GI Combat and Ghost Manor. I spent hours reading and re-reading every issue, drooling over the art and wanting more. In many ways I'm still that kid and always will be. Bloke's Terrible Tomb of Terror scratches that monster itch I've had most of my life. Resurrecting the feel of the old EC days of Tales From The Crypt, but with a freshness that makes it more than a throwback. 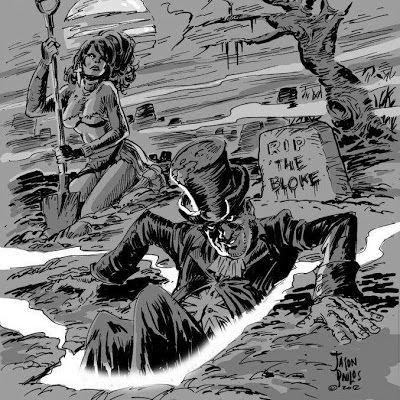 Each issue is hosted by The Bloke, a British undertaker along with his hot cohort, the Fearleader.

Writer Jason Crawley (aka The Bloke, as he appears at conventions) has a twisted sense of humor and must have grown up watching the Twilight Zone (Clockwork Orange style). He's previously written Son of 6 and Tomb of Horror with his own imprint Virus Comix.
Over the course of a single issue he spins about six self contained vignettes, ranging from creepy sci-fi, gothic ghost tales, zombies, werewolves, vampires, and more. Every issue is tight and fun, devoid of filler. 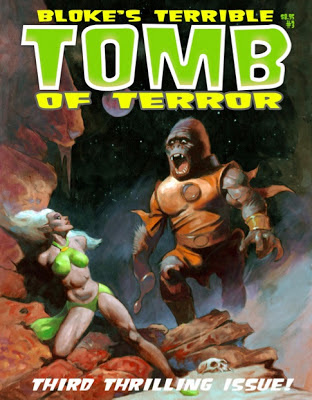 And then there's the artwork. Most of the art chores are up to Mike Hoffman, who I've profiled here before. He does all the covers and most of the interiors.
No stranger to horror, Hoffman's work has graced the pages of Hellblazer, Taboo, Twisted Tales and Swamp Thing. On par with Frank Frazetta and Bernie Wrightson, Hoffman's gorgeously painted covers and black an white interiors gives Crawley's words legs and every issue runs like a cheetah (a hungry zombie cheetah!).
The rest of the art duties go to a changing line up of talented folks who never disappoint.

Even better for the art, Tomb is presented in an old school magazine style, perfect for letting the horror breath. 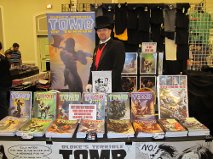 You can get your bloody hands on a copy of all 6 issues (number 7 is due in June) through IndyPlanet or at comic and horror conventions where the Bloke appears. And follow the Bloke on Twitter @BlokesTomb, cause he's a hell of a nice guy! 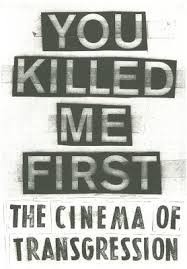 I'm not an writer because I've got nothing better to do, or I thought it would be a good career choice. I'm a writer because I can do absolutely nothing else. I write or I die-or at least I might as well die, because I'd be totally useless. I grew up in a broken home, moving around a lot in low rent housing and trailer parks. I never ever fit in with my family or neighbors. I was called 'faggot' so much I deserve honorary membership in the club. Having the psychological, psychic, verbal, emotional, and physical abuse heaped on me shaped me into the artist I became, for good and ill. It guided me towards the music I need to get through the day and the movies and books I escape into.
And in all that I'm, thankfully, not alone.
This is a cruel and twisted world for many of us; the odd, the broken, the marginalized. We have no voice in government or popular media, so we build our own societies and movements outside the mainstream. Every artistic or political or social realm has an outsider antithesis. Whether it was the Dadaists or the Beats or the punks. 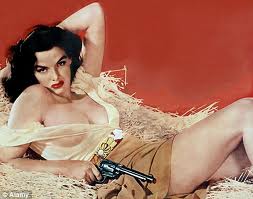 In film, there has been censor-baiting mavericks almost since the beginning. In 1929, Luis Bunel and Salvador Dali dragged a razor blade across a woman's eye in Un Chien Andalou. Howard Hughes made Jane Russell's  breasts a character in '43's The Outlaw. In '72 John Waters filmed his famous leading lady, Divine, eating dog shit. Just to name a few.
New York City in the 1970's was a hot bed of creativity. Andy Warhol was certainly a catalyst for many amazing things happening; the way he branched out into music with the Velvet Underground and Nico, theatre and film with Paul Morrissey after turning heads with his pop art paintings.  Film followed suit with desperate rebels armed with 8mm cameras and little to nothing to lose. 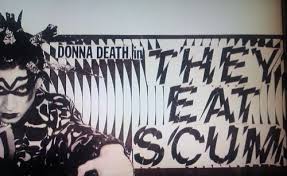 Cinema of Transgression sprung from the No Wave Cinema movement of the late 70's, which had a lot of crossover with the No Wave music scene. Underground Film Journal has a great review of CoT plus Nick Zedd's manifesto and links to several films on Ubuweb.
My exposure to Cinema of Transgression came from searching for Lydia Lunch videos at the great and sadly gone Garage Video in Allston MA (in the Allston Mall, where GG Allin supposedly did a spoken word show where he put his head through one of the windows). I knew Lunch had made films called Fingered and Right Side of My Brain, what I didn't know was they were both directed by Richard Kern and found on the same two volume VHS collection (Hardcore Collection; The Films of Richard Kern). Will, the owner of Garage Video sent me home with both volumes, Nick Zedd's Geek Maggot Bingo, and Lunch's the Gun is Loaded.
These films defined the spirit of punk rock better than many punk bands I listened to. The raw desperation bled all over the place. These were protest films that didn't protest with signs or slogans, rather their whole physical and philosophical being, from the content on screen to the actual VHS tape. Every minute was a fuck you, because frankly these documents of sex, drugs, violence, and society on the brink shouldn't exist in a safe sane world. Kern's You Killed Me First sums up all these things.
Lung Leg in You Killed Me First created more unease in me than Jason Vorhees ever did, because I was forced to actually question my own values. I want to side with her character as a heroine, but the extreme and cartoonishly oppressive world she and her family exist in don't leave a ton of room for sympathy/empathy and you wonder why doesn't she just run away or better, why can't everyone just listen to each other, because you're a family and that's what you do? Preposterous, I know. I certainly didn't grow up in a household where you were 'listened' to. Often you were talked AT or yelled AT, but never listened TO.
Lung Leg's dialogue is pure punk rock, you can put music to her dinner speech. But she's also scary and psychotic, presumably driven that way by family, but the way we're dropped into the film at an arbitrary point in her life we have little context for her anger or theirs. Which came first, what has happened, is this usual teen vs. parent drama or has something darker came before? Maybe it's irrelevant. After all, if you don't already relate to Leg's character on gut level you probably would avoid a film like this anyway.
Kern assaults the viewer; the camera angles are seemingly irrelevant. The dialogue and it's delivery almost parodies 50's/60's sitcoms, like some existential/alternate dimension Leave It To Beaver. He makes the dinner of a mid-American family as desolate and hopeless as any dystopian science fiction.
You Killed Me First is a good Litmus test for the uninitiated. It may not be as strong a film as Right Side of My Brain, but like Kern's other films and those of his peers, it demands more from the viewer than the viewer can demand of it. Kern is making a statement not trying to entertain you.

you should know NIGHT WALKER CINEMA 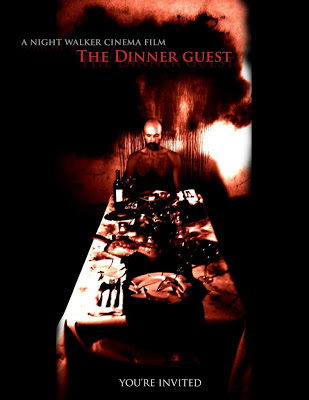 If you don't know we love indie movies and filmmakers here at Stranger With Friction, then you must be new around here.

Night Walker Cinema, with two shorts under their belt, is doing a crowd funding project for their first full length, The Dinner Guest.

James Neff and Joseph Dean Martinez seem like cool and smart people and the film looks pretty damn interesting. Check out the link here to see the teaser trailer and find out how you can help them reach their goal.

THANK YOU EVERYONE WHO HAS BEEN READING THIS BLOG! Kind of a staggering number for some nobody from the South. I hope everyone keeps coming back!
-Tim/King Vulture
Posted by Tim Murr at 2:05 PM No comments: 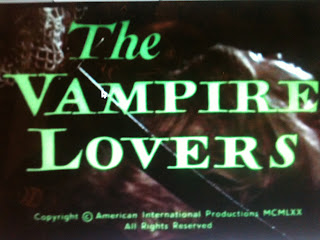 From Hammer Films; In the heart of Styria the Karnstein Family, even after their mortal deaths, rise from their tombs spreading evil in the countryside in their lust for fresh blood. Baron Hartog whose family are all victims of Karnstein vampirism, opens their graves and drives a stake through their diabolical hearts. One grave he cannot locate is that of the legendary beautiful Mircalla Karnstein. Years of peace follow that grisly night until Mircalla reappears to avenge her family's decimation and satisfy her desire for blood. 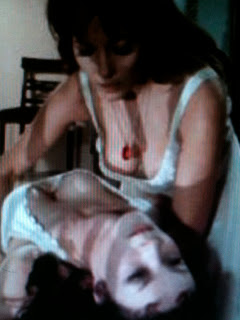 While The Vampire Lovers features the great Peter Cushing, you'd hardly notice with Ingrid Pitt, Madeline Smith, and Pippa Steele spilling their ample breasts all over the screen. The film may not hold a candle to Hammer's Dracula or Curse of Frankenstein, but this is a fun and fantastic film regardless.
Pitt plays the notorious and lustful Mircalla who starts working her way through the young ladies across the countryside. The dirty twist is that Mircalla drinks her victim's blood from their left breast rather than the neck, saucy!
Some of the dialogue is hilariously loaded, like "It was a giant cat" "My mouth was full of fur".
The whole film exudes that classic Hammer atmosphere and though it's light on plot it still delivers on entertainment. 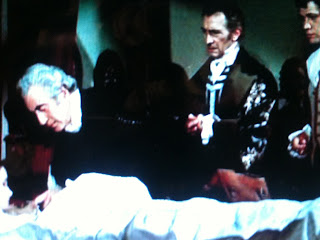 The Vampire Lovers would have benefitted from more blood, beheadings and boobs and less old dudes talking. Other than that I give it 3 Severed Thumbs Up.