NIHIL NOCTEM'S FOR A GOOD TIME CALL..."REVENGE IS ONLY THE BEGINNING" 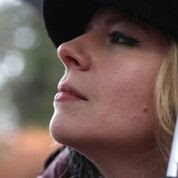 Director Izzy Lee, who made the great INNSMOUTH, which is streaming on Shudder now (read my review HERE), A FAVOR, POSTPARTUM, and PICKET just got her first Official Selection for the Chattanooga Film Fest for her short FOR A GOOD TIME CALL... which stars Diana Porter (INNSMOUTH) and Tristan Risk (INNSMOUTH, AMERICAN MARY). Like all her work, it's a challenging, creepy, and punk-as-fuck piece of transgressive cinema. 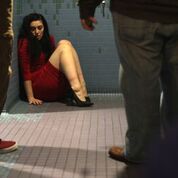 The film starts with an asshole (played with considerable sleaze by Sean Carmichael) hiding a camera in his room before having sex with a woman (Porter). He then leaks the video to the internet and the woman is shattered. He plays dumb, of course, has no idea how the video got on the web, naturally! And he's really broken up by how upset this woman has gotten-so upset, in fact, that he doesn't hesitate to follow another woman into a public toilet at a rest stop. 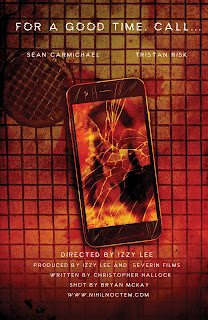 "I hope something very bad happens to you,"Porter's character had said before the next woman appears.


All I'm going to tell you is that Tristan Risk is scary here. The make up FX is superb and the story, as a short film, combines technology with urban legend come-to-life. It calls to mind one of the morality stories from TALES FROM THE DARKSIDE, but with a far more pronounced since of the fucked up. I love it.

Any and all accolades Lee receive are earned and deserved. She absolutely kicks ass as a director and writer. On the heels of the Chattanooga Film Fest announcement came the news that INNSMOUTH also got an Official Selection nod from Mad Monster Party in Charleston SC.


To see the teaser follow the link HERE to view it on Vimeo and you can follow Lee on Twitter @NihilNoctem.
Posted by Tim Murr at 2:51 PM No comments: 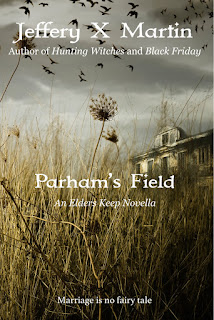 Let's take a road trip back to Elder's Keep. Back to the mysterious hills and hideaways of East Tennessee. A place of beauty and heavy history. A haunted place. Haunted even before the Cherokee got there, probably. A place where I grew up. Author Jeffery X Martin grew up there too.

So connected to the dirt beneath his feet, my old friend Jeff started weaving tales about Elder's Keep, or The Keep, in his first short story collection, BLACK FRIDAY. He brought us back to The Keep with HUNTING WITCHES, a novel. Both journeys were chilling, emotional, and as haunted as those green hills. Now he takes us back with his newest story, a novella, that just went live on Valentines Day, which was eerily fitting.

The story opens with a murder. I'll leave it at that. Then begins the investigation, heading by sheriff Graham Strahan and accompanied by Joseph "Josie" Nance, who runs the Elder's Keep Historical Society. The murder occurs in Parham's Field, a place everyone in The Keep knows to stay out of. The details of the murder has Strahan stumped and he turns to Josie for some help. It's Josie that suggest they go talk to the shut in, Dr. Parham, who Strahan just assumed was dead, as his house and property had been in disrepair for as long as Strahan could remember.  They pay a visit to the old doctor together, just to ask a few questions, but nothing is ever simple in The Keep, and the men get a tale nothing could have prepared them for.

PARHAM'S FIELD is such a tightly, well crafted, and tragically beautiful slow burn of a story, that I found myself bouncing along to the book's own unique rhythm and getting lost in a narrative that's part family history, part police investigation. This isn't a mystery, it's, as the doctor says, a confession. Jeff pushes the needle towards the red ever so gently, ever so slightly, building a sense of dread from page one-which you'll carry with you anyway if you've read either of the previous books-and then holds the tension until what you find is undeniable, regardless of where your mind may have been at the beginning. Vague, I know, but I feel it's important to guard the book's secrets. Let Dr. Parham tell them to you, after all, it's his story to tell.

On a couple of personal notes, Jeff's wife finished the book in tears and refused to talk to him for the rest of the night. I think that's important to know going in. "It gets dark," Jeff said. Yes it does. Also, there's a bit about a church in a place called Wheat. That church is said to be haunted and I personally tried to break in there when I was 18 or 19 to see if it were true, but...events had my friends and I speeding away from the area at 100 MPH. A little midnight ghost hunting lead to a wrong turn and we found ourselves on restricted government property. Kids.

I'm giving PARHAM'S FIELD my highest recommendation. You don't need to have read the previous two books to get into it, but they're so good as well, there's no reason to skip them. You can order your copy HERE.
Posted by Tim Murr at 8:48 AM No comments: 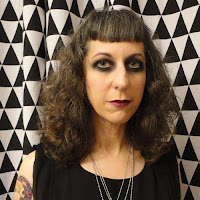 Everyone have a good Valentines Day? Whatever, I don't care. Anyway, how's winter treating you? We've had lots of great lake effect snow here and it's been really lovely.  Perfect weather to stay inside and watch horror movies. Which is why we're all here, right? Well for our latest installment of Dead Of Winter the lovely and talented LESS LEE MOORE has graced us with her review of THE CORRIDOR, which is currently streaming on Shudder. Less Lee is the mastermind behind the awesome POPSHIFTER (which I also write for) and you can also find her on Modern Horrors, Everything is Scary, and in the pages of Rue Morgue!


One of the coolest subgenres of horror is the “unreliable narrator.” From Let’s Scare Jessica To Death 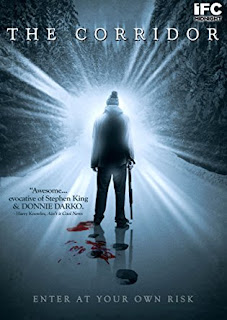 to the more recent POD, this trope is sometimes manifested through the main character’s mental instability. As such, it can provide a frightening commentary on the real-life horrors of mental illness.

2010’s The Corridor, directed by Evan Kelly, takes an unreliable narrator and places him in a cabin in the middle of the snowy wilderness. Like the titular character in Let’s Scare Jessica To Death, Tyler Crawley has just been released from a mental hospital and is trying to get his life back together. He and four friends are spending the weekend at his now-deceased mother’s cabin in the woods and they are all understandably hesitant about whether or not Tyler is truly sane.


The film’s prologue places the audience in media res to a standoff that took place at some point before the boys’ weekend. Tyler is hiding in a closet, hearing his mother’s voice inside his head, even though his mother’s dead body lies on the floor of the hallway in front of him. When his friends try to intervene, he goes after them with a knife before being tackled to the ground. This memory hangs heavily over Tyler and his friends – Chris, Everett, Jim, and Bob – as they try to pick up the pieces of their shattered friendship. 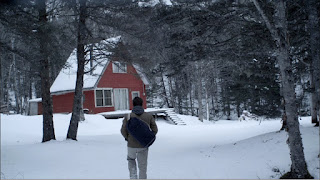 The Corridor also explores the crisis of masculinity that each of these characters experiences. Tyler’s fragility is the most obvious, but not necessarily the most damaging. Everett has impersonal sex with a woman at work before he heads out to the cabin; Jim is wondering how to tell his wife that he’s sterile; Chris feels like he hasn’t become a man yet; Bob overcompensates for his thinning hair by acting extra macho.


All of these individual dramas are filtered through ongoing reminiscences about Tyler’s mom, Pauline, who looms large in the collective memory of the four friends. This exacerbates the already-existing tension of the male characters’ apparent need to assert their masculinity.


When Tyler discovers a strange phenomenon in the woods, he’s not sure if it’s he’s seeing things 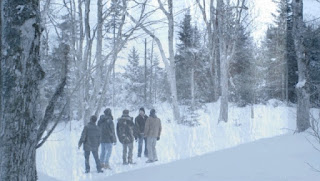 again or if it’s real. There’s a sense of relief when he brings the others outside and they see it, too. Yet, because this is a horror film, we know that relief will not last long. In fact, it soon becomes replaced with something more disturbing.


There’s a considerable science fiction element to The Corridor. While the movie may sometimes remind viewers of The Thing, it trades John Carpenter’s iconic body horror for something more cerebral (but still brutal). It’s never clear what the phenomenon in the woods is or where it came from, but as the characters soon find out, it’s been around for a long time.


Not all of the questions raised by The Corridor are answered, and the film presents us with enough horrifying sights that it will creep around in your head for a while. You can watch it on Shudder Canada. (Just watch out for static on the TV…)

DEAD OF WINTER DOUBLE FEATURE; WENDIGO and THE LAST WINTER

And we're back! Missing summer yet? Of course you're not! We've had plenty of lake effect snow here in the greater Syracuse area and it's glorious. The perfect weather to keep your ass on the couch with a big ass mug of coffee and watch horror movies while the wind howls and whips and the windows.


For this latest edition, I'm looking at two films by art-horror auteur Larry 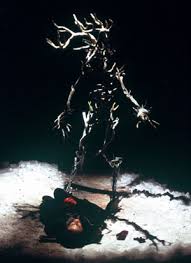 Fessenden-writer, director, producer, actor. Fessenden has made and/or appeared in several of the best independently produced horror films we fans have. The purpose of this series, of course, I'm focusing on his films WENDIGO and THE LAST WINTER. Both films were released through Fessenden's Glass Eye Pix and both films are the epitome of great winter chill horror.

In 2001's WENDIGO, a family (mother, father, and son) head to Upstate New York for a weekend in the country, but have an unfortunate run in with some locals that gets out of control and leads to the malevolent Native American legend, the Wendigo, manifesting itself from the imagination of the young son. A slow burn and immersive film, Fessenden does a deep dive into character drama, while the tension builds almost subversively. The third act is dizzying and harrowing. 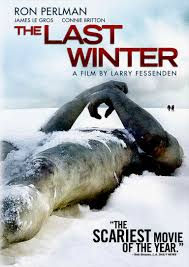 2007's THE LAST WINTER, starring Ron Perlman (Hellboy, Blade II), James LeGros (Phantasm II, Drugstore Cowboy), and Connie Britton (American Horror Story), THE LAST WINTER is about an oil company in the frozen expanse of Alaska that accidentally release something ancient and deadly from the long frozen ground. THE LAST WINTER is the scarier and more fast paced of the two films, but also mines a bit of the same mythical territory as WENDIGO. This time though, its the ghosts of ancient earth lashing out against man for his trespasses against nature. It's hard not to make comparisons to THE THING, given the frozen setting and isolation/hopelessness faced by the characters, but the comparisons end there. THE LAST WINTER is very much it's own movie and plays up a more psychological horror that evolves into a supernatural descent into violence and destruction. It's a powerful and jarring film, but also very beautiful. And like in WENDIGO,  Fessenden puts a 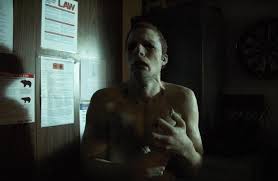 heavy emphasis on character development, ignoring the good guy/bad guy conventions of typical story telling, instead giving us flawed and real characters who exist in a more realistic gray area.

Both films take full advantage of their settings with Fessenden ratcheting up the terror and dread in thought provoking stories. I recommend both films, highly. THE LAST WINTER is streaming on Shudder right now, but WENDIGO seems a bit harder to track down outside of the LARRY FESSENDEN COLLECTION box set, which also includes the down beat urban vampire film HABIT.