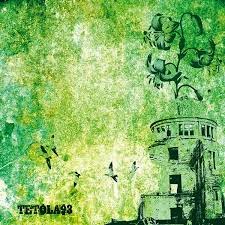 Japanese hardcore noise band Tetola93 have released their first full length album about year after breaking up. I was completely ignorant of this band two weeks ago, but this album has made me a fan. The vocals are in Japanese so I have no idea what they are saying, but no matter; passion is universal and that comes through loud and clear.
This self titled farewell has many strengths. For one the production is superb-while chaos reigns the sound never becomes muddy. There's also a great diversity in the material and tight song writing. These guys were no slackers. While the listener is washed away in chaos, melodies ride the waves. The music swings from pretty to dangerous, but even at it's most harrowing the group always maintains control, driving the chaos like a Formula One race car.
The album is hitting US shores via Meat Cube, hit the link to hear this amazing band and order your copy. You can also go to Tetola93's Bandcamp page for their earlier EPs.
(A note before signing off; Bands that sing in a foreign language generally have a hard time getting a foot hold in America. This is both understandable and regrettable. Punk and metal fans are generally more accepting of non-mainstream music and I hope that willingness to take a risk comes through for this release, because it is very good and a worthy addition to extreme music fans' collection.)
Posted by Tim Murr at 3:02 PM No comments:

SO, STILL NO FEMALE LED SUPER HERO FILM COMING FROM MARVEL OR DC?

Sounds like Dr Strange has found a director and is in good hands. Good for him. But what about Wonder Woman, Spider Woman, Black Widow, Bat Girl, Huntress, Black Orchid...Hell we had two major villainessess in Dark Knight Rises (Talia Al Ghul and Catwoman) who both had to take a backseat to mush mouth Bane (who was great, really). Hasn't Scarlet Johansen proven that she kicks ass as Black Widow and could carry a solo film? Props to Arrow for having a number of strong female leads, here's hoping they keep it up in season 3.
Anyway, here's a few of my favorite kick ass lady flicks. Yes, some are certainly better than others, but none are boring! (Batwoman is one I just found out about today. It's a Mex-ploitation flick from 1968 and not connected to the DC character, but sports an Adam West style cowl and a bikini.)
RAZOR BLADE SMILE
BATWOMAN 1968
VAMPIRELLA
KILL BILL
ALIENS
FASTER PUSSYCAT, KILL KILL!
What are your favorites, fiends?