Now that I've watched Don Coscarelli's John Dies At The End a couple of times, I wanted to rewatch Coscarelli's previous film, Bubba Ho-Tep. The film knocked me out the first time around...

I was only a few months old when Elvis Presley died, yet his image loomed large for years after. Maybe it was just where I grew up, but Elvis was like a Protestant saint. It seems like I grew up knowing Elvis better than Jesus. I always knew about the dark haired man in the rhinestone studded white suit. I always knew Jailhouse Rock, Hound Dog, and Gentle On My 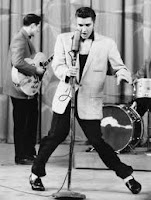 Mind. I've never been to Memphis, TN but I've only ever thought of it in association to Elvis's home, Graceland (even before Cash, The Killer, or Sun Records). I knew he was in a bunch of movies, none of which I ever saw growing up.  I knew the only other artists that demanded reverence on Elvis's level were The Beatles.  It was only in my early teens that I discovered he had been a bloated drug addict that died on the toilet.
Elvis hit America like a bombshell with his hips and sneer and voice. He was raw energy. You had to shoot him from the waist up for television, because the rest was too obscene. You had to make him do something stupid like dress up in a tux and sing Hound Dog to a basset hound to take the edge off.  For a time Elvis had the world wrapped around his finger.  Then his manager Col. Parker started controlling him and making him appear in god awful movies and recording crap music. So, after a while Elvis became nothing special. He still had fans. He still made money. It was a price to pay and so far away from the hillbilly cat he once was.
Starting in 1968 Elvis began to shrug off the bubblegum pop that had weighed him down and stripped him of his raw animal coolness. There was the comeback special where he appeared head to toe in black leather, looking badder and more dangerous than he ever had in 1956. This wasn’t just the Elvis fans had been missing for the last decade, this was a new and improved, mature, sexier Elvis. It was an Elvis in his thirties. He was not just back from a long slumber to reclaim rock and roll, but to reclaim the world.
It was the Memphis record backed by Neil Diamond’s band that showed the world what this hillbilly cat from Tupelo could really do. Never had his voice sounded so good. Never had he been given such a wealth of great material to work from. Never had he shown such range; from raucous R&B to smooth southern soul to pure shit kicking country to weeping ballads. It was a middle finger to critics and those who’d lost faith. It was a middle finger to his peers who spoke ill of him through the 60’s. And perhaps it was a middle finger to Col. Parker, because Elvis always knew he was better than all those crap films. Perhaps he realized what ‘Elvis Fucking Presley’ meant to the world and that he’d just spent ten years not meaning anything.
Unfortunately, after the comeback there would be less than a decade left for the King for Rock and Roll. The 70’s were a fast decline in health, mental and physical. Drug addiction and erratic behavior

that would’ve been laughable if it weren’t so damned sad.  But he never failed to put smiles of adoration on the faces of those who’d pack the venues to see him. They cheered, clapped their hands, stomped their feet-right up to that day when that putrid walking corpse Rock and Roll fell for the last time, again.
The faithful gathered at Graceland and wailed and sang his praises. They left flowers and exalted him to the TV cameras. A nation mourned, as they had for Kennedy as they would for Lennon. Elvis lives on though. Metaphorically for most, very physically for many others.

In Bubba HoTep, Elvis didn’t die on a toilet. That was merely an imposter Elvis had traded places with. The real Elvis was off performing as an Elvis impersonator, doing what he’d always loved with out all the bullshit he’d always hated. But not dying young has its disadvantages, like being 70, bedridden

with a large cancerous growth on your dick, and no one believing whom you are. Not to mention being stuck in an East Texas rest home with a bunch of senile freaks and a soul sucking mummy on the loose.
Written by one of the best modern horror writers, Joe Lansdale, and directed by the great Don Coscarelli, who brought us the excellent Phantasm movies, Bubba HoTep is an anomaly in a genre bloated with recycled plots, that were weak the first time around.
Bubba HoTep isn't just one of the greatest horror movie ever made, it’s one of the best movies ever made. It’s got action, laughs, drama, tragedy, an over the top story line that sucks you in, great special effects and performances from two of the finest actors to grace the silver screen.
Bruce Campbell’s performance as Elvis (in three different periods of his life) are spot on and undeniable. He is Elvis and you believe it. Then you have Ozzie Davis playing John F. Kennedy, who, like Elvis, didn’t die when he was supposed to and has wound up at this nursing home in east Texas. Ok, you say, Ozzie’s character is just crazy, right, because JFK was white. Well, Lyndon Johnson and his cronies dyed him black and filled the bullet hole in his head with sand.
An inept staff, the Lone Ranger, a kleptomaniac, some generally normal old people, and a couple of big, nasty bugs round out the cast. Then there’s the title character himself. Bubba HoTep is a soul-sucking mummy from ancient Egypt, who was stolen from a carnival sideshow, then lost in a bus accident, not far from the nursing home, where he goes to feed at night.
Elvis and JFK are the only ones who know about Bubba, and feel that it is their duty to put a stop to him. “Ask not what your nursing home can do for you, ask what you can do for your nursing home.”  But the destination wouldn’t be worth the ride if it weren’t for the characters’ stories and the actors’ performances. Ozzie Davis is comical without doing anything funny. He’s so earnest and straight about 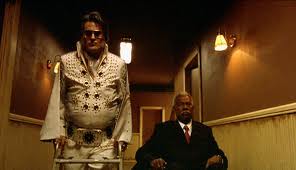 playing JFK, and delivers his lines about conspiracies and Lyndon Johnson sincerely, never hamming it up, never nudging the viewer in the ribs with a wink. The same can be said for Campbell’s Elvis, who spends nearly half the movie in bed lamenting over the lost years with his daughter and his inability to get a hard on. If there was no mummy in this film, and it was just an hour and a half of Campbell and Davis being these people and dealing with the everyday aspects of being forgotten, unloved senior citizens, the film would still be riveting.
There’s little to compare Bubba HoTep with. To compare it to anything you’d have to split the movie in two, the drama half and the horror half. The drama half is a quirky character driven piece similar to The Royal Tannenbaums, while the horror half is something like Evil Dead meets Santa Clause Vs. The Martians or something Ed Wood would have pitched. It would be hard to imagine anyone besides Don Coscarelli pulling off such a masterful piece of filmmaking with such a bizarre premise. 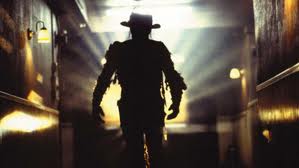 Its no wonder Coscarelli had such an uphill battle to find distribution; just to describe the movie isn’t easy to do with a straight face. It has to be seen to be believed, but what a risk. Elvis and a black JFK fighting a mummy in a nursing home? It could only be one of two things; awful or brilliant. Bubba HoTep is a brilliant film and I love it. Of those who have seen it, I’ve been hard pressed to find anyone who doesn’t love it.  Hats off to Don Coscarelli, Joe Lansdale, and the whole cast and crew for injecting a little more life into the American movie.