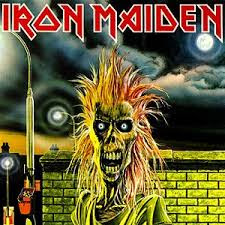 You can argue with all you want about which Maiden album is the best, I mean, we all have our favorites and few aren't very good, but the first album is still the one I listen to more than any other. From the opener, Prowler, to the closer, Iron Maiden, the self titled debut is a near perfect heavy metal album and the epitome of the New Wave of British Heavy Metal.
I snagged the cassette for four dollars I'd saved from skipping lunch in middle school. Maiden was one of the groups banned by my mother, so I had to buy it on the sly and sneak it into the house. I kept the cassette in either my stereo or walkman, with case hidden with a small stash of (ahem) illicit reading material. That's how serious a problem heavy metal was seen by my mom. She'd already banned Alice Cooper (a devout Christian) for being a sick Satanist and was convinced that I'd wind up on drugs and worshipping the Devil myself if I listened to the garbage. But like with my impending obsession with horror, I found ways around the rules and dived head long into head banging music. I mean, for all the rules I had to live by I was fairly unsupervised and I only got caught when I was careless.
My cousin had Iron Maiden posters on his wall, including the long, uncensored version of Killers, so the image of Eddie had been seared into my brain for years and after hearing a snippet of Running Free in 6th grade I knew I had to get some Maiden.
Maiden came out of Britain right at the start of punk rock and their debut has a very raw, punk feel to it, but the band disowned any notion of there being an influence. They recorded the album in thirteen days, mostly by themselves after parting ways with their producer. Debuting at Number 4 in the UK, it didn't take long for Maiden to become a world wide phenomena. (Look at some video of Maiden playing in Brazil in the last few years if you have any doubt about how huge this band is.) There's really nothing I dislike about this album, although it took me a while to really warm up to the slower, prog-like Remember Tomorrow and Strange World, but once those songs had their hooks in me, I really got into those heady sci-fi moments. Phantom of the Opera is even more proggy and the longest track on the album, but I dug the horror influence and it was a much faster song. The rest of the tracks are pure rockers; Running Free, Charlotte The Harlot, Sanctuary, Prowler, Transylvania, and Iron Maiden put to shame most rock bands' whole catalogues...and this was their debut! Never mind Piece of Mind, Number of the Beast, or Powerslave (or the rest of their stellar albums!).
There really aren't other bands out there you can compare to Maiden, even the other NWOBHM bands. Maiden are unique and irreplaceable and everything from the songs, to the album covers and t-shirts to the "face" of the band, mascot Eddie, to their longevity put them head and shoulders above their peers in nearly every respect. I saw them in Charlotte a couple of years ago with Alice Cooper and they still put on an amazing show and despite the fact that you still won't be hearing them on FM radio they played in front of a larger audience that time around than they did when they had an album in the charts. Maiden fans still care, they're still devoted, even they don't like a particular song (or singer), and it all started with a bad ass eight track (nine in the US) album with a strange zombie head banger on the cover.
UP THE IRONS!

FRIDAY THE 13TH THE SERIES IS NOW STREAMING ON AMAZON PRIME!!! 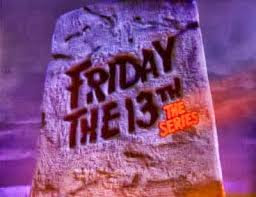 Throw up your hands and say "Hot damn!", fiends! Friday The 13th the series is now streaming on Amazon and it's free for Prime users.
The show follows Micki, Ryan, and Jack as they search for cursed objects to lock away in the vault inside their antique store. I haven't seen the show since it aired, but I stayed up to watch it premiere on October 3, 1987 and stuck with the series until its unceremonious cancellation in 1990. I was, at first, very disappointed that it had nothing to do with Jason and/or the Friday films, but I got over it pretty quick.
The show was excellent. Scary, cool, well made. Tonight I'll be sitting down to rewatch the series, which couldn't come at a better time, since I just finished binging on Twin Peaks and Fire Walk With Me.
Friday fans will recognize Ryan (played by John D LeMay) as the hero of Jason Goes To Hell. Jason X cameo actor and my favorite director, David Cronenberg, directed the episode Faith Healer (which sounds an awful lot like certain episodes of Supernatural and Constantine, hmmm). Long time Friday producer, Frank Mancuso Jr, also produced the series and made the decision to name the show after the films even though there's no connection.
Going through the episode list on Wikipedia is exciting, because I remember some of the episodes particularly well. If you're new to the show it was a lot of fun to watch and came at a particularly good time for basic cable TV; we had other series like War of the Worlds, Alienation, Freddy's Nightmares, Monsters, new Alfred Hitchcock Presents, and a little later, X-Files, Swamp Thing, and Twin Peaks. Add that to the late night movies and amazing programming on USA and it was a fabulous time to grow up.
Here's an episode called Wedding In Black that I recall with some fondness. Listening to that opening score brings me straight back to 11 years old, with a bowl of potato chips and a huge glass of soda, hunched over, glued to the screen. I hope you like(d) it too!

BREAKING NEWS; GHOSTPUNCHER HAS A PRODUCER AND A DIRECTOR!!! 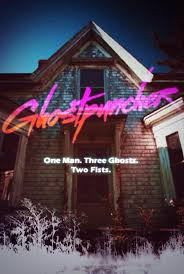 Great news for writer/creator Jordan McCloskey's upcoming film Ghostpuncher; Gabriel Napora has come on as producer and Trevor Cornish has come on as director!

"Gabriel is the owner of Triton Films Inc. and Indian VFX company Tiyabella Visual Effect.Mr. Napora has recently produced the Martin Sheen film "Badge of Honor" and the Danny Trejo film "Juarez 2045". "Chappie", a Sony feature, was based on a short film Gabriel produced with Neill Blomkamp (Director of "District 9"). He currently has projects in progress with Paramount, Warner Brothers and Lions Gate Entertainment. Gabriel's work is known for visually striking, heavy visual effects films."


Trevor’s short film “Roland” premiered at TIFF 2013 and has since been screened at a dozen other film festivals around the world."

"Ghostpuncher is the story of a single father and his son who move into a house that is EXTREMELY haunted by three spirits known as The Collombelles (a mother and her two daughters who were serial killers in 1897.)
At first the ghosts are playful and harmless, but when the spirits become menacing, eventually possessing dad, the son turns to the ONLY place he can think of for help... THE INTERNET.
There he finds a desperate, down and out exorcist calling himself the "Ghostpuncher" who claims to have a gift that allows him to PUNCH ghosts and send them BACK to the netherworld. He is willing to perform this exorcism, for a price of course, but quickly discovers the ghosts in the house won't go down without a bloody fight."
Posted by Tim Murr at 7:05 PM No comments: