MY HEROES HAVE ALWAYS BEEN MONSTERS PART 49; RETURN OF THE LIVING DEAD PART 3 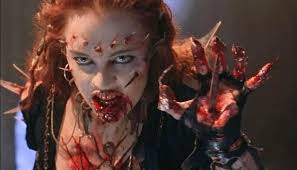 I have loved George Romero's living dead world since catching NIGHT OF THE LIVING DEAD on TV one Halloween, it had quite a profound effect on me. DAWN OF THE DEAD, the first sequel, even more so. In 1985 Romero released his third dead film, but it flopped, but there was another dead film that was connected to NOTLD through a direct reference in the film and by one of the writers. John Russo had co-wrote NOTLD and co-wrote the story of 1985's DOTD competitor, RETURN OF THE LIVING DEAD, with Rudy Ricci and Russell Streiner (who also produced NOTLD)(Dan O'Bannon, who wrote Alien, wrote the screenplay and directed after Tobe Hooper backed out to make LIFEFORCE.) Though it came out a little prior to my full immersion into horror, I remember the trailer and thought it looked awesome. I begged to see it and the answer was a flat 'no, shut up.'

By the time 1993's RETURN OF THE LIVING DEAD 3; ZOMBIE PUNK appeared on the cover of Fangoria, the first two ROTLD were well loved favorites of mine. Pre-internet, most of my horror movie news came from either Fangoria or Siskel and Ebert. So finding the new issue of Fango with Julie Walker (Mindy Clarke) on the cover with the glass and spikes sticking through her skin and looking like some kind of goth punk queen made my heart go all a'flutter.

Directed by Brian Yuzna (BRIDE OF RE-ANIMATOR, SOCIETY, FAUST), RETURN OF THE LIVING DEAD 3 continued from the first two films with the military continuing to experiment with the compound that reanimates the dead. A military kid and his girlfriend accidentally witness one of the zombies being revived. Later, after having an argument with his dad, the boy and girl take off on his motorcycle and then get into an accident. The girl gets killed and the boy sneaks her back into the military compound and bring her back to life. Wackiness ensues.

If you know Yuzna, you know he makes amazing, over the top, gory films. Unfortunately, the rated version of the film is a mess (as it often is). It appears to have been edited for content by a butcher, so it's important to get the unrated version. ROTLD3 ups the comic book zaniness over the two previous films and makes Julie an amazing living dead anti-heroine. Aesthetically, Julie is one of the most interesting zombie characters ever to grace the screen and I wish she could have been spun off into her own series of films, or comics at least.

The newly re-animated Vestron Video is re-releasing ROTLD3 and giving the Blu Ray the red carpet treatment with audio commentary from Clarke and plenty of interviews. It's one of those must owns for me.

Laying back a bit for the month of November. There will be posts, but fewer than there was in October, as we prepare for our next big series of reviews; DEAD OF WINTER; The Best Winter Themed Horror Films. Right now I've got three guest posts lined up and they are kick ass writers and I'm very happy to have them on board. 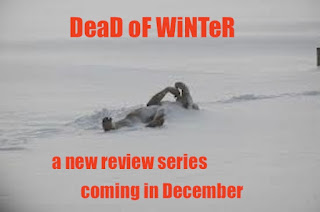 DEAD OF WINTER seems like a no-brainer since, ya know, winter is coming, but really Stranger hasn't spent a lot of time in the snow and there are some really good movies I've been itching to write about, but just haven't gotten there yet.

I hope you've been enjoying our filmography series, which will be ongoing. If you've missed it, so far I've covered Rob Zombie and David Cronenberg and guest poster Albert Muller wrote an extensive and fantastic John Carpenter in the 80s piece. I plan to tackle Bill Lustig, Frank Hennenlotter, Abel Ferrera, and Wes Craven in the near future. I see this series as a sister piece to MY HEROES HAVE ALWAYS BEEN MONSTERS. Speaking of...

I had always planned fifty chapters of MHHABM, before I turned the series into a book. Well, Part 50 is right around the corner, but instead of ending the series I believe Part 50 will instead be a chance for a bit of course correction. If you've been with me a while, you'll have noticed (I hope) an improvement in content, presentation, and focus, because admittedly I had an idea about what I was doing, but at times lost focus. The big relaunch in October was meant to signal the first part of this course correction, and Part 50 will catch up and reboot MY HEROES HAVE ALWAYS BEEN MONSTERS and it will start to become more like the book I've always envisioned. 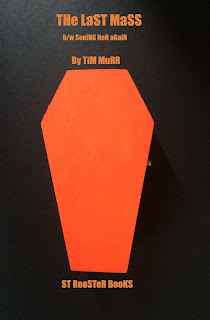 Since the October relaunch the site's numbers have been great! So thank you all for stopping by, I can't tell you how much it means to me to have so many people read my dumb little blog. I mean, lets face it-Stranger With Friction is far from the only horror blog out there and that you take time to pop in and read one of my articles, that's very humbling and awesome! I wish I got some comments though! I'd love to become more interactive with my readers. Let me know what you think, even if you think I'm full of shit.

Ok, I've got to get back to writing. I'm committed to getting my next book, MOTELS ON FIRE, out HERE.
early next year and it ain't writing itself, sweet heart. In the mean time, the first 'single' from MOF is available on Smashwords for you e-readers and a physical copy will be available very soon. The story is called THE LAST MASS and I'm really wearing my love for Fulci and Carpenter on this one. The 'b-side' is called SEEING HER AGAIN and it's a bit more of a down beat, slice of life story. You can get that e-book

Keep watching the sky, nerds!
Posted by Tim Murr at 11:53 AM No comments:

Something I love is a good music biography or music history book. A rock bio is often my refuge when reading fiction is starting to corrupt my own writing style. I could give you a massive list of highly recommended biographies, but there are three books I'm high lighting today, which inspired this Sound Attack; Greil Marcus's MYSTERY TRAIN and INVISIBLE REPUBLIC (aka OLD WEIRD AMERICA) and Nick Tosche's COUNTRY; THE TWISTED ROOTS OF ROCK AND ROLL.  These books have inspired a multitude of horror stories, film ideas, and comic book projects, not the least of which my last novel CITY LONG SUFFERING.
Dock Boggs "Pretty Polly" https://en.wikipedia.org/wiki/Dock_Boggs