PARTICULAR KIND OF GIRL; an excerpt from the upcoming novella CONSPIRACY OF BIRDS by Tim Murr

While Im still doing massive rewrites on Conspiracy Of Birds I wanted to put up a chapter, maybe get a little feedback, see what you discerning fiends and fiendettes think. Enjoy! Or don't, I'm not trying to tell you how to live your life. One note for clarity; the story takes place in a city outside of time, like a pocket universe, where time means nothing, so parts of this city are ancient, but as new as the modern parts. Or something.
Emily was sitting alone as usual in the back of the café, fretting over some scraps of paper and tea. She never looked up to see who was walking through the door, and rarely spoke to anyone. She would sit there for hours, sipping tea and wringing her hands. She bit her lip a lot and closed her eyes for long periods of time. I imagine she was praying in those moments. I never saw anyone make an attempt to talk to her and that bothered me. No one here seemed half as lonely and no one seemed half as avoided. 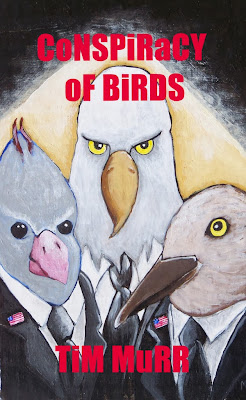 Lenny said he tried to talk to her once, decades ago, but she was a "cold fish."
I stopped in the café once a day to get coffee and while I waited I'd always watch her out of the corner of my eye. How did she get so far from home?
I decided when I woke up that afternoon I'd talk to her that day. I told Lenny as he helped me tie off and shoot up. He shrugged and told me good luck, then stuck the needle in. We nodded for a while, listening to a Charlie Parker record, like good junkies should.
I woke up in the recliner that came with the room. It was uncomfortable and slightly older than Christ. Lenny was gone, so was the rest of the dope. That was ok, I hadn't developed a habit yet. I took a swig of whiskey and went into the bathroom to shave and shower.
While I shaved I kept getting confused by my eyes in the mirror, because they seemed to be looking some place else and not right back at me.
The late morning was hot and sticky. The air thick with bugs. Street vendors were hawking their wares and the street kids were hawking themselves. A street prophet was dropping spiritual bombs like a B-52 from Heaven.
Outside the café representatives from every religion, earthly and alien, had a flyer or tract to give me. I collected the ones that seemed the farthest out and tucked them into the messenger bag I rescued from the trash a few days ago. I had taken to collecting religious pamphlets years ago when I was in high school and had amassed an impressive collection. I could have a PhD in religion with what I've learned from those things.
There were only a few people in the café. It was dark and cool. The low hum of Indian music filled the air like a shorting fluorescent bulb. I ordered a large coffee with two ice cubes, and carried it to the back.
Emily was stirring her tea nervously, muttering to herself. I walked over slowly, checking out the paintings on the wall. I stopped at the Beckman that hung over her table.
"Pretty amazing, huh?"
She looked up, surprised and confused.
"The painting. It's a Beckman. He's my favorite painter."
She turned to the painting. She'd never noticed it before. The blues and black lines, the distorted faces pushed her away.
"I prefer Edward Hopper," she said.
"I like Hopper too."
"Do you want to sit?" She blurted out.
"Yeah, thank you." I told her my name and she told me hers. She kept stirring her tea, looking around me, trying to make conversation about the heat, the bugs, the quality of the tea here...I tried to ask her about herself, but she couldn't muster much in the way of answers, just half sentences, nervous giggles, wringing her hands. I felt like all she needed was something to loosen her up, so I asked her if she'd have a drink with me.
"I-I really don't drink...Maybe a glass of wine at night, if I'm having trouble sleeping, but that's..."
"Have one with me anyway. I hate to drink alone."
She nodded weakly and I went up to the counter. I ordered two bourbons on ice with a splash of soda in hers. When I returned to her she wasn't wringing her hands or stirring her tea. She was perfectly still looking out the window. When I sat down she looked back to the painting and scrunched up her nose for a brief second and looked away with a brief shudder.
I set her drink down in front of her and she looked at it like I'd just handed her a glass of piss.
"There's a little coke in yours. It'll go down easier."
She absently touched the glass, rubbing her forefinger up and down in the condensation. Without looking at me she raised her eyebrows and picked up the drink.
"Why?"
"I'm sorry, why what?"
"Why do you insist on me having this?"
"I don't-"
"I told you I drink an occasional glass of wine. Nothing more. I turned this down, but you insisted. And here I sit with it."
"I'm sorry-"
"No, you're not. You need me to drink this. You need to sully me. You need to bring me down to the level you perceive yourself to be."
I looked down at my drink, praying for the right words to come.
She knocked the drink back in one gulp and glared at me.
"It's even cheap. Why didn't you just bring me a bottle of Thunderbird in a paper bag? You look like you have something to say. Let me guess, it's something along the lines of 'C'mon, bitch, I wanna screw!' Am I close?"
She stood with stone cold sober stability and fixed me with an ice stare.
"This is why I never wanted to go anywhere. Because you're all the same."
She left the café with angelic grace, gliding through the mob outside. The bourbon was bitter in my mouth and made my stomach turn. I looked up at the painting and cursed under my breath. She'd be going back to the hotel. I needed to avoid her for a while so I sat a little longer before I got up and stepped into the heat.
Copyright 2011 Tim Murr/St Rooster Books
Posted by Tim Murr at 12:26 PM 2 comments:

Can't say I had incredibly high hopes for Amazing Spiderman 2, but now i feel safe being excited...
Nurse 3D looks...titillating
Big Bad Wolves will not be the feel good family comedy you're looking for
Niether will Here Comes The Devil
And um, probably not Antisocial either...Oh my God!

MY HEROES HAVE ALWAYS BEEN MONSTERS PART 40; THE FOG 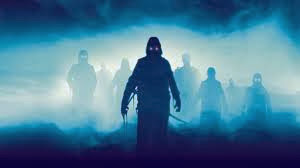 One hundred years after their deaths, ghosts in a Californian coastal town have returned in a mysterious fog for revenge.
Simple. Simple, elegant, tight. A great straight forward ghost story from one of the true masters of the horror genre. John Carpenter's The Fog (1980) gets less attention and respect than Halloween or The Thing, but it's a real treasure for those who have seen it. The set pieces are tense and well crafted, the ghosts are truly scary and the cast (Andrienne Barbeau, Jamie Lee Curtis, Janet Liegh, and Tom Atkins) is strong and entertaining.
I first saw The Fog on late night TV and on a tiny set. I sat on the edge of my bed glued to the set with a notebook in my lap treating the movie like a master class (rightly so), trying to figure out how to tell frightening stories. I was in love with the movie and it scared me so bad there was no way I was sleeping until the sun came up. 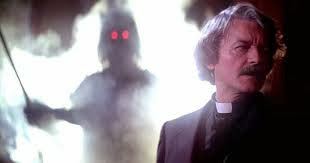 While Halloween remained my favorite of Carpenter's films (and favorite slasher) The Fog's minimalism and classic ghost story feel, not to mention another great score by Carpenter himself, was a cut above the standard horror fare and stood out at the dawn of a decade that was dominated by the cookie cutter slasher genre. Carpenter would go on to greater acclaim in '81 with Escape From New York and in '82 with The Thing, but The Fog is that overlooked middle child that really deserves every bit of attention as it's older and younger siblings.