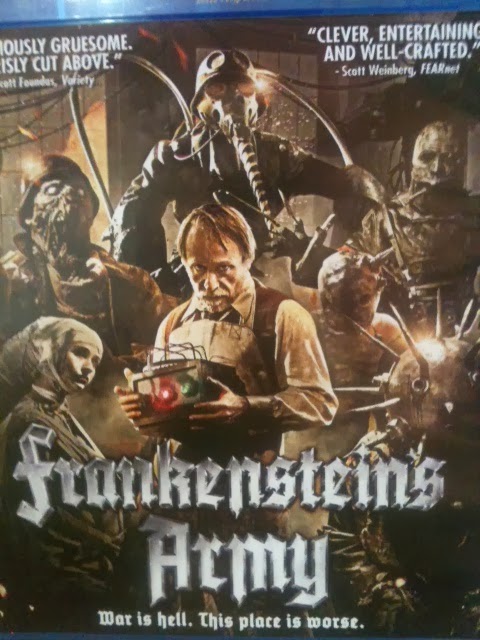 Richard Raaphorst's Frankenstein's Army is an amazing monster film. Since I first saw stills from the production a couple of years ago I've been chomping at the bit to see this beast. There were a couple of teaser trailers on-line called Worst Case Scenario, which are a must see if you haven't yet, but they really don't prepare you for this tense and fast paced war horror work of art.
When I discovered that Frankenstein's Army would be a found footage film I lost a great amount of enthusiasm until I saw the first trailer. Now that I've seen the film, I can't imagine it being done any other way. Raaphorst places you in the film and makes you feel every ounce of tension and terror the damned camera man feels.
The film follows a battalion of Soviet soldiers making their way through Nazi territory in the latter days of World War II. Upon receiving a distress call from some comrades they set off for a small town to rescue them, but nothing is what it seems and it's a quick plunge into unbridled monster horror.
The creatures are fantastic and creepy as hell. The gore is gruesome. The level of craftsmanship that went into making Frankenstein's Army almost makes you forget the found footage device as you're immersed into the story.
At only 84 minutes(!) you'll either be thirsty for more or so stressed out you'll be grateful it's over so fast. Either way, we need sequels, lots and lots of sequels.
In the sub-genre of Frankenstein films, Frankenstein's Army is unparalleled in terms of high quality creature effects and originality in designs. Story wise, it's tight if not a bit thin. There are certainly more philosophical Frankenstein films, but there's no room, no time, for long speeches about man and God, life and death. You'll be too busy trying to get the hell out! 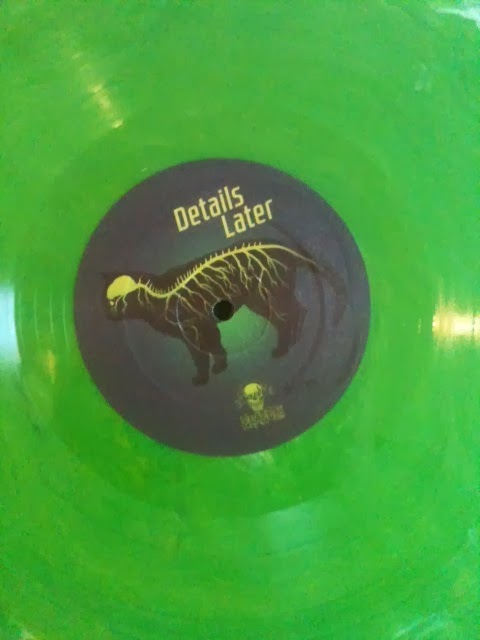 This week I received my copy of Waxwork Records' release of the ReAnimator original soundtrack! I won this beauty through Basement Screams (if you're not following that site, you should really start!).

ReAnimator (starring Jeffery Combs, Barbara Crampton, Bruce Abbott, David Gale, and Robert Sampson, directed by Stuart Gordon and produced by Brian Yuzna) stands on a very high pedestal for me. Based on the novella Herbert West, ReAnimator by HP Lovecraft, it's a bit of a reworking of the Frankenstein story with some very wild ideas and experiments Dr Frankenstein never dared to imagine. The movie is even wilder with explicit gore and a black sense of humor. Great performances from the whole cast, fantastic practical effects, and lovingly adapted by the filmmakers.

When it comes to '80's horror ReAnimator defines 'high water mark'. I wrote about it in My Heroes Have Always Been Monsters Part 7. 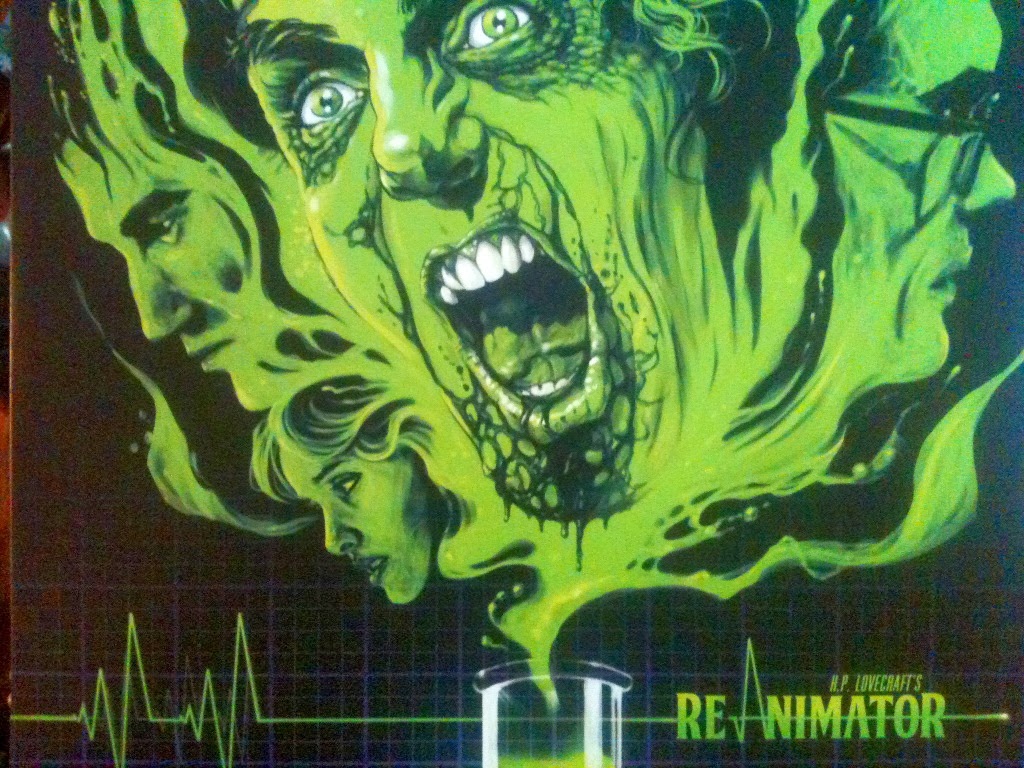 Let's get to the soundtrack! Composed by Richard Band, the music is iconic and always gets me excited when it starts. I've seen some comments that it's just a rip off of the Psycho soundtrack, but I dismiss that notion. I guess Band has said it was an homage, and on a superficial listen of the main title you can draw some similarity, but if you live with music you'll find a brilliant slab of sound that stands perfectly well on it's own without the movie. 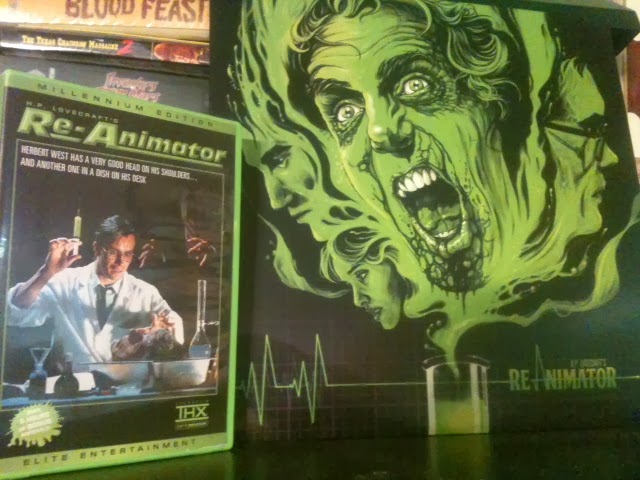 This is a really smart choice as a first release. Waxwork Records have done a gorgeous job, from the re-agent colored record (some glow in the dark!) to the original sleeve art by Gary Pullin (also included as a poster). The sound quality is crystal clear and warm.

Waxwork has also released the Day Of The Dead OST and coming next is Rosemary's Baby. Follow the link to their site to stay up to date on all releases so you won't have to chase them down on EBay!


Here's a little taste of the great music. 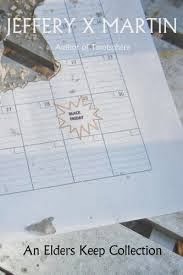 In the mountains of East Tennessee lies the town of Elders Keep. Things aren't exactly right in the Keep, and as the town heads towards the holiday season, the evil force that lives within the woods comes pulsing to the forefront. It's all downhill to New Years, and no one in the Keep is safe. This collection of eight short stories is your invitation to join the citizens of Elders Keep as they make their way through a harrowing holiday season. Only the dark and twisted mind of Jeffery X Martin could create a town where humor and terror live side by side in such harmonious agony. Welcome to Elders Keep. If you lived here, you'd be dead by now. (from the Amazon description)
Full disclosure; I've known Jeff Martin since I was eighteen, therefore I have known him longer than I care to reveal. It's been a really long time. We used to haunt the same open mic at a bar called Manhattan's  in Knoxville TN's Old City neighborhood. He was probably more influential and helpful to me in growing as a writer than he knows. I could go on and on about all the late night talks and the whack job characters we hung out with, but I'll spare you, dear reader, that tumble down fuzzy-memory lane. After all, this is a review. I wanted to be upfront though; I know this cat. He's a friend. Fortunately my natural bias is reinforced by the fact that Black Friday is an absolute great damn book.
For those who read the line 'In the mountains of East Tennessee' and immediately heard dueling banjos let me point out that Tennessee is the proper South and not the deep South. Much of anything inhabitable in the mountains has been or will be yuppified and at times clash with the more traditional or hillbilly ways and Jeff captures this aesthetic of the modern South with pitch perfect clarity, crafting a rich and deep world. Not to say that those of you who like a little Southern fried redneck scariness won't find plenty to chew on! Jeff writes with a smooth and infectious groove. As much a musician as he is an author, Jeff gave Black Friday a rhythm that is ancient and pagan making each chapter a sort of ritual that you experience in your nerves. The depth of the stories and the diverse cast of characters kept me feverishly turning the page, devouring each story.
Jeff wields the tools of a horror craftsman as he guides us through the downward spiraling, Dante-esque saga of the people of Elders Keep and along the way offers a biting commentary about modern society. A simple drink with a lover or an old friend, a trip to the dentist or the store, a night out at the club or a talk with mom is an opportunity for ghosts and monsters to plunge you into bloody terror. Elders Keep doesn't need ghosts and monsters to scare the crap out of you though. The regular inhabitants can be just as fucked up as anything your nightmares can cook up. The stories "Be Sweet" and "Mouth" genuinely made me cringe.
It was painful to make it to the last story, because I did not want the book to end. Black Friday satisfied on all levels. Get this book now!

And follow Jeff on Twitter @JefferyXMartin and at www.facebook.com/elderskeep. He also writes a kick ass music column for www.popshifter.com

A SEQUEL WORTH YOUR TIME; THE EXORCIST III 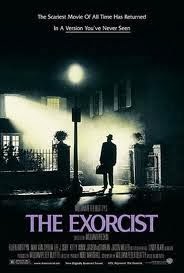 Sequels are the bread and butter of successful horror films and often the bane of horror fans. More times than not a sequel is nothing more than a cash in, a retread, or a dud. Sometimes it's not a dud, but gets such a strong negative reaction before it even hits theaters or DVD that it bombs and gets a bad reputation. You can't blame horror fans who groan at news of another chapter for their favorite horror film when we get more Texas Chainsaw Massacre; The New Generation, Jaws The Revenge, Friday The 13th Jason Takes Manhattan than we do Aliens, Evil Dead 2; Dead By Dawn, or Dawn of the Dead.
Last month The Exorcist turned 40. Both Rue Morgue and Fangoria have excellent celebratory issues on the stands right now. The Exorcist has to be the scariest movie of all time. The only other film I can think of that made me cringe and fill me such a sense of dread and left me not wanting to rewatch it (at least for a very long time) was Henry; Portrait of a Serial Killer. Even Henry falls short of The Exorcists ability to create a true horror experience with shocks that haven't dulled over the decades.
Like all successful horror films The Exorcist has some sequels. There's even talk of a Exorcist TV series and let's all go ahead and cross our fingers now that this never gets off the ground. The first sequel, The Heretic (1977), directed by John Boorman, is widely considered by fans to be an 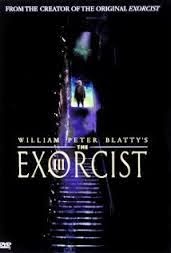 abomination. I remember someone going on a lengthy rant about what a piece of shit it was when I worked at Garage Video in Allston MA. Exorcist III is completely different animal though.
1990's The Exorcist III is based on the William Peter Blatty's real sequel, Legion (1983), to his original novel and was directed by Blatty himself.  Taking place years after the original film, we follow Detective Kinderman 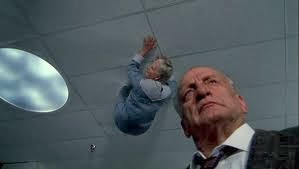 (George C Scott) as he investigates a series of murders that closely resemble the murders of The Gemini Killer, a serial killer believed to be dead. The investigation leads Kinderman to a mental hospital where he meets a man known as only as Patient X (or Sunshine in the novel). I don't want to give away any plot details, but I will say there are direct connections with the first novel/film and presented in a way that feels nothing like a cash in on the originals' successes.
Blatty is a powerful storyteller. Both The Exorcist and Legion are scary as hell reads and the films are 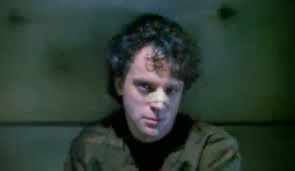 worthy adaptations (which goes without saying in The Exorcist's case). III is an overlooked gem, which considering the colossal disappointment of Heretic, is understandable. The scares are very effective, the dread is palpable, the imagery is frightening and the villain (Brad Dourif) is intense. I've watched III probably half a dozen times at least and there's one scene that still makes me jump-I know it's coming, in fact I knew it was coming the first time I saw the film, Blatty really telegraphed the scare with the shot he used, but dammit if I'm not "Ah!" everytime.
The Exorcist III is not a perfect film, but it is a hell of a thriller/horror film and a worthy follow up to one of the best horror films ever made. 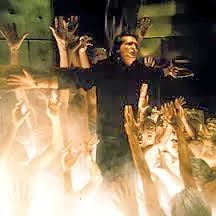