Can we talk about this movie??? Not a direct sequel, just a cheap Italian rip off from 1980. I feel like I heard about Alien 2 On Earth a long time ago, but I never found a copy and thus forgot about it. I came across it again while exploring Troll 2's IMDB page and watched the trailer...You need to watch this trailer!
That looks friggin' rad right? Amazon has an awesome review written by a thirteen year old who claims "This movie is not for kids, just adults, SUPER SCARY, GORY, BLOODY, AND A SCENE OF NUDITY."

How much endorsement do you need??? It also features Michele Soavi (The Sect, The Church, Cemetery Man)!
And then there's ROBOWAR from Bruno Mattei. Looks like it's an almost shot for shot rip off of Predator except with a reject villain from Mighy Morphin Power Rangers. What's not sweet about THAT?
If your going to do a shit rip off of a good film, look to the Italians for how to do it right!

MY HEROES HAVE ALWAYS BEEN MONSTERS Part 38; THE PHANTOM STRANGER 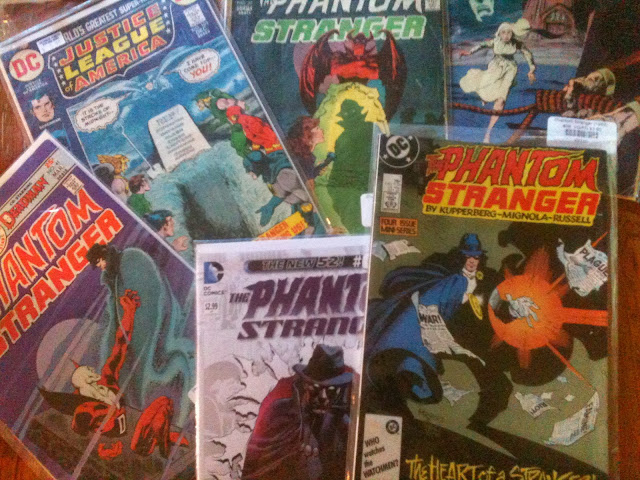 John Broome and Carmine Infantino created The Phantom Stranger in 1952, giving him a six issue series, but it wasn't until 1969 when he was reintroduced in Showcase #80 that we got the Stranger that is most familiar to comics fans. Originally, the Stranger was a hoax breaker, disproving supernatural events and had no supernatural power himself. Since then there have been five different possible origins given for the Stranger, none definitive except the last one in Phantom Stranger #0 (2012) where he's revealed to be Judas and his never ending journey is his penance for betraying Christ.
Fans have seen the Stranger fade in and out of various DC titles for years and occupying his own 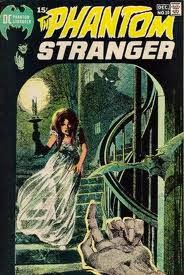 excellent series and mini-series. The mysterious traveler would show up out of no where, be cryptic, help the Justice League or Swamp Thing and disappear into the great unknown.
When I was a kid, there was no Phantom Stranger series (until the '87 mini series drawn by Mike Mignola, but I was unaware of it until later). It was only guest appearances in Swamp Thing that I first became aware of the character and started seeking him out. I've always said DC Comics's greatest strength outside of Batman was in the B, C, and D list characters. Especially the supernatural/horror super heroes. The great, weird and eerie 1970's adventures of the Stranger are perfect examples. Mixing  costumed adventuring with Lovecraftian horror, keeping his origin, purpose, even powers vague, and giving an ultra-cool and unique look made those comics some of the best I've ever read. Particularly, issues featuring Deadman (who I rank right up there with the Stranger) really drove home just how unique DC's universe was. Yes Marvel and other comic publishers have and do mix the supernatural into their super heroing, but DC had a look and a style that was unmatched.
Marvel's great horror titles of the 70's, like Werewolf By Night, Tomb of Dracula, and Ghost Rider were exciting and cool, featuring great artwork and writing, but they never had a Phantom Stranger. The new Stranger series in DC's new 52 and his appearance in Justice League Dark have been more than satisfying and worth following. #0, which I mentioned earlier, was a cool jumping on issue for the uninitiated, written by Dan Didio. It lacks the darker spook house feel of the 70's, but I doubt anyone can recapture that.
The Stranger has shown up in the cartoon series Justice League Unlimited and in a darker episode of Batman Brave and the Bold. I've heard rumors about a Phantom Stranger tv series coming from JJ Abrams, but I'll believe it when I see it. But if there is any character that would lend itself to a cool and creepy hour of weekly tv it would be the Stranger.

You like speed metal? Of course you do! So have some

No More Mr Nice Guy
She Wolf (acoustic)
Wake Up Dead
Hook In Mouth
Hangar 18
Holy Wars...The Punishment Due
The Blackest Crow
Skin Of My Teeth 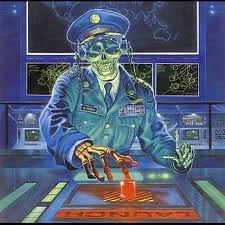 Email ThisBlogThis!Share to TwitterShare to FacebookShare to Pinterest
Labels: megadeth

Email ThisBlogThis!Share to TwitterShare to FacebookShare to Pinterest
Labels: robocop

My Heroes Have Always Been Monsters Part 37; Stephen King 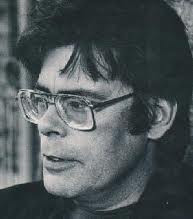 There's some memories that are a little foggy, details get mixed up, but one I remember for sure is when I read my first Stephen King novel...
It was early summer, just after fifth grade and my parents were heading to the library. I don't remember what inspired the need, other than I knew I wasn't reading enough actual novels. My interest in horror was growing and I was trying to write my first scary stories, but needed to see how it was really done. Frankly, King's was the only name I knew. So I asked them to pick me up one of his books, didn't really care which one.
A couple hours later, my step dad handed me Cujo. I had seen a review of the film on tv and knew it was about a rabid dog which, frankly, didn't sound all that scary.  I read it anyway and for my first adult novel, it didn't disappoint. I don't remember Cujo being scary, but I do remember it being full of profanity, sex, and violence and not being shy about any of it. And it was the most engrossing book I'd ever read. From that point I started reading everything by King I could get my hands on and got through everything up to Insomnia which came out my freshman year of high school.
My earliest attempts at writing horror were flimsy attempts to capture King's style. This was mostly fruitless and I could never find the 'horror' in my story. I could do violence, but it lacked scares. I wasn't able to relax and realize that I was only 12 and had plenty of time to find my own voice. Instead I read Pet Semetary and It and The Stand and The Dead Zone and Night Shift and Skeleton Crew, screaming inside my head "WHY CAN'T I DO THIS???"
I was full of self loathing and self doubt anyway and my reaction to any art that turned me on was to become obsessed and secretly hate it. I plowed through King's books hardly enjoying them sometimes, just wishing I could write something like that. Some books would suck me in to the point of pure enjoyment, like The Dark Tower I; The Gunslinger.
By the time Insomnia came out I had started writing comic book scripts almost exclusively. With the few short stories I was turning out I had embraced the fact that I couldn't be scary, but I could be disgusting. Everything I wrote was chock full of graphic and grisly violence (in part inspired by David Cronenberg's films and David Quinn and Tim Vigil's Faust; Love of the Damned).
I definitely placed too many expectations on King, expecting him to teach me how to write and then not valuing how entertaining his books were. Insomnia was the first one I didn't like, in fact couldn't finish. And around that time my English teacher, in a sly way, shamed me for not reading anyone else (I did love Shakespeare though, geez!) and my Spanish teacher recommended I read Michael Crichton's Jurassic Park (which sounded completely stupid at the time). Recognizing I needed to broaden my horizons, I read Jurassic Park and fell in love with it, realizing it was another way of telling the Frankenstein story.
I took a long break from King and got into Clive Barker and went back to some of the classics I'd skipped or missed. Eventually I got into a lot of Splatter Punk and then the Beats and from there I've been all over the map. It was only recently that I re-bought a few of my favorite King books from the thrift store. Mainly I wanted to finish the Dark Tower series and re read The Mist, which still stands as my favorite short story of his.
Stephen King has been around so long and created a body of work so large and is so widely read that he's like baseball or jazz or Coke, he's intrinsically tied to the American experience. Maybe not as widely respected as an author as, say Norman Mailer, but only because he's a 'horror writer' and the great powers that be and the Lit' Nazis don't respect horror or any genre fiction. The Stand will probably never be taught in a high school English class, but it's a hell of a lot more fun than As I Lay Dying (not to disrespect Faulkner!).
I think in the end what makes King one of my heroes is he gave me something to measure against as a writer. And he entertained the crap out of me. Stylistically, as a writer, I'm probably more like Jim Thompson while trying to capture Don Bajema's magic, but I know where I came from. I went from Robert Louis Stephenson to Stephen King before I went anywhere else.
Just for the hell of it here's my 10 favorite King stories, in no particular order...
10) Dark Tower I; The Gun Slinger
9) The Dead Zone
8) The Mist
7) Pet Sematary
6) Carrie
5) Cycle of the Werewolf
4) The Dark Half
3) Quitters Inc
2) Children of the Corn
1) The Stand

Keep watching the sky, nerds!
Posted by Tim Murr at 3:08 PM No comments:

The remake of the 1979 Australian flick Patrick looks pretty good...
I'm a fan of the original three Child's Play films, but hadn't watched the newer ones. Curse of Chucky looks like a return to the franchise's true horror roots.
Coming this October Tyler Mane takes on Derek Mears in Compound Fracture!
Supposedly Wrath of Crows has already hit DVD, but I haven't found it yet. Looks insane and the reviews have been positive. 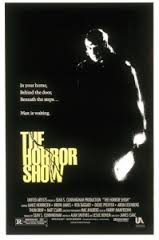 2013. No word yet on what the extras will be, I'm hoping for an indepth behind the scenes documentary and new interviews with the cast
Directed by James Isaac after David Blythe was fired, the film was released in Europe as House 3, which is why there's a House 4, but no actual House 3.
According to Wikipedia, The Horror Show was released theatrically in April '89 (months before Wes Craven's Shocker which was virtually the same movie) but not released on home video until '99. I'm pretty sure that's inaccurate, there must have been a VHS release pre-'94 because I rented it while still living in my home town, which I moved from in '95.
Brion James plays Meat Cleaver Max Jenke, a very prolific serial killer. Lance Henriksen is the detective who finally brings him down. Jenke gets the electric chair, but he's been dabbling in some dark stuff and is soon back from the dead, looking for revenge. 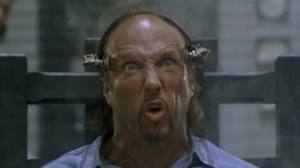 I'm looking forward to this release. Horror Show was a tense and gory flick with typically great performances from Henriksen (Aliens, Pumpkinhead) and James (Blade Runner, Enemy Mine). Critically it was dead in the water and I've read tons of complaints about the film.  I preferred Horror Show to Shocker, simply because I thought Shocker fell apart in the last act, but it'll be interesting to rewatch it after all these years and see if it still holds up.


The trailer is not in English, but I couldn't find one that was. 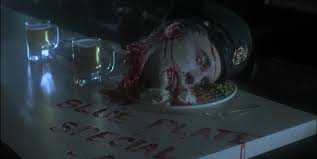