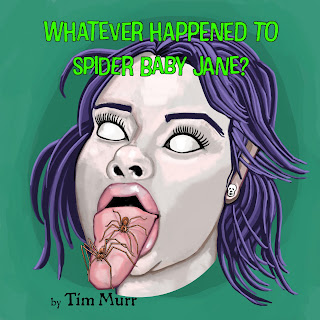 My latest short story, "Whatever Happened to Spider Baby Jane?" is now live exclusively on the Godless Horrors app for a mere 50 cents! Click the link or download the app for a world of amazing horror fiction ranging from traditional to extreme and everything in between. The cover is by Steph Murr (naturally)!

Jane was a normal fourteen-year-old girl. She loved art, heavy metal, and horror movies. Her upbringing had some rough roads, but the only real mystery was the identity of her father.
The answer arrived when her grandmother got out of prison with a heart full of Hell and mind for revenge.

The first new fiction from Tim Murr, award-nominated author of The Gray Man, Neon Sabbath, and My Head is Full of Black Smoke, since 2020 is a mean slab of Splatterpunk action horror.

St ROOSTER BOOKS KICKS OFF SUMMER WITH A MONSTER JUNE!

We're hitting summer hard this year with a packed June, following the late May release of the author preferred edition of Jeffery X Martin's Hunting Witches. 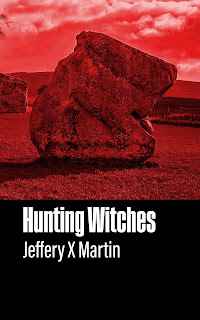 Issue six of Stranger with Friction drops mid-month with a feature on my favorite doom/sludge metal band CROWBAR, as well as all new fiction with the theme of Dark Tourism. 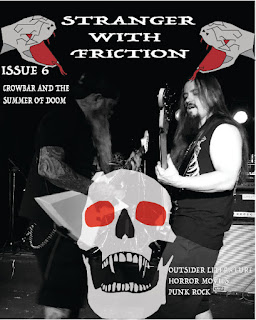 I'll have a Godless Horror exclusive new short story called "What Happened to Spider Baby Jane" dropping on June 23rd, which I'm really excited to share, since it will be my first new piece of fiction in two years (not that I haven't been busy, I've got three novellas and three screenplays in various stages of completion).

June 28th will see the simultaneous release of Thomas R Clark's Summerhome on Godless, Nook, Kindle, paperback, and hardcover. The follow up to last year's hit, The God Provides, Summerhome is a wicked slab of terror that will leave readers reeling! 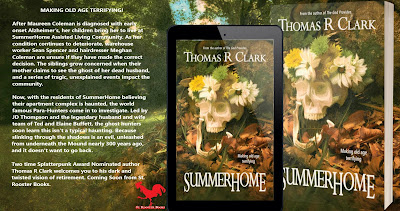 But on the 26th, we are releasing the first short story collection from Icelandic author Villimey Mist, author of the Nocturnal vampire series. As the Night Devours Us is a wildly imaginative and terrifying cycle of stories that will drop first on Godless with the paperback and Kindle to follow on July 1st. 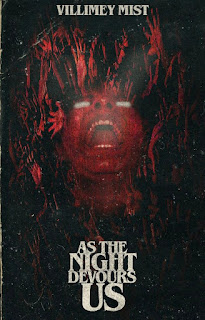 JEFFERY X MARTIN's SHORT STORIES ABOUT YOU and PAUL LUBACZEWSKI's I NEVER EAT CHEESESTEAK live on GODLESS HORRORS! And More!

"The new owner of a home that holds a terrible surprise. An insomniac whose quest for sleep leads you to a horrifying discovery. The parent of a little girl who holds the keys of damnation and salvation in her tiny hands. You are all these people, and more. In this brave collection, author Jeffery X Martin makes the reader the main character in fifteen nerve-grinding new stories, filled with horror, humor and jagged pieces of human nature." 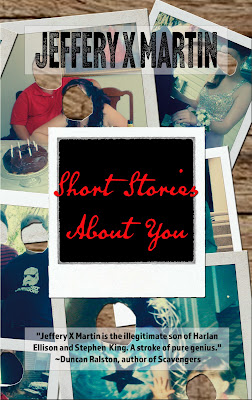 "They say life is what happens when you're making other plans. It is also what happens when you need cash to record a demo, but that isn't as catchy in a song, or a meme. Al was coasting through life without a plan or a clue when he was offered a way to make quick cash without doing anything illegal, mainly because killing vampires is not technically against any laws. If he agrees he jump starts his musical career, but on the downside, he has to combat the forces of undead evil, including their horrific fashion sense. Will Al survive? Will his punk rocker sister Angie finally dump her loser boyfriend? Will Al's girlfriend come to her senses and dump him? Will Al's gruff partner Abdiel become "woke"? (Depends on your definition) Will the citizens of Philadelphia discover the dark festering evil that lurks in their very city?(other than Eagles fans) Will anyone eat an actual cheesesteak? The only way to find out is to read this book, because there will probably never be a Cliff Notes for this one!" 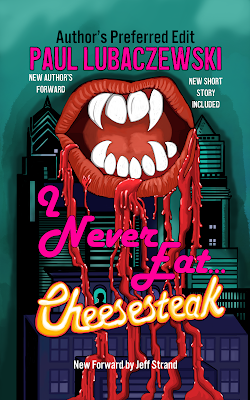 Both books are available on the excellent and revolutionary Godless Horror app, which is a must have for horror fans who prefer e-readers over paperbacks. For you physical media fans, Cheesesteak is available right now and Short Stories About You should be live within the next couple of days.
In Other News...

Starting in issue six of Stranger With Friction, we are excited to announce we will be serializing the new novella by Carter Johnson called Tales from Behind the Counter!

Dropping next month, April 21st, on Godless and Amazon, St Rooster Books is proud to present Saint's Blood by Ryan Bradley! Want a reason to be excited? Check out what Owen King, author of Double Feature: A Novel and Sleeping Beauties (with Stephen King) has to say about it;

"Miracles do happen in Ryan Bradley's dark and unrelenting Saint's Blood, but be warned; they come at no small price. Saint's Blood is an impressive debut. I enjoyed it and I'm excited to see what Ryan Bradley writes next."

There's just over a month left to get your submissions in to us for No One Likes a Tourist: An Anthology of Dark Tourism. What is Dark Tourism? It's going to the site of tragedy, disaster, murder, or other dark events rather than going to Disney World for your vacation. I'm talking about touring Chernobyl or taking the Jeffery Dahmer serial killer tour. For this anthology, I'm asking you to take this concept and create your own dark tourism scenario. People going to bad places and having bad things happen to them. As always; no sexist, racist, homophobic, or transphobic material. I really don't like the rape-revenge sub-genre either, and I'm unlikely to accept such a story. Otherwise, go nuts! 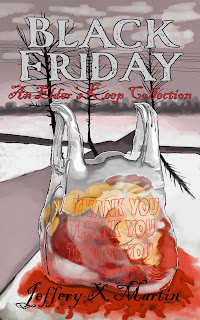 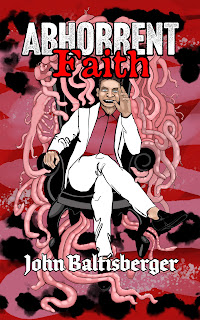 Our two latest releases are now available! We've started our release of author preferred editions of Jeffery X Martin's books with his debut short story collection, Black Friday: An Elder's Keep Collection. Originally released in 2012, Black Friday introduces us to the town of Elder's Keep, a small town in the foothills of the Smoky Mountains with a fair share of dark secrets. This Appalachian Horror/neo-Southern Gothic collection is simply amazing, and St Rooster Books is so proud to present this handsome new edition!
Black Friday: An Elder's Keep Collection: Martin, Jeffery X: 9798401974860: Amazon.com: Books
Next, the sequel to last year's critical hit, Abhorrent Siren by John Baltisberger has arrived! Abhorrent Faith is a tension filled philosophical monster bloodbath that will knock you on your ass! Undead Dad Reads says, "This gem of the extreme horror literature is a fascinating, fast paced, incredible edge of your seat read that pulls the reader in a world of the most hideous, blood churning mutations including the one of faith."
Abhorrent Faith: Baltisberger, John: 9781955745093: Amazon.com: Books 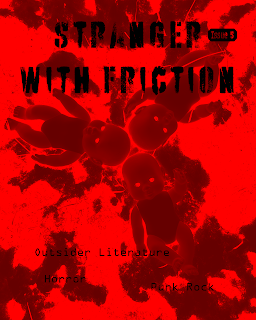 We're starting two subscription services at St Rooster Books!
The first is for Stranger With Friction, our literary/horror/punk rock magazine, which drops four times a year. Our first three issues have come out really well and have received some solid reviews. We have a December issue coming to close out 2021 and then the first issue of 2022 should drop late February. 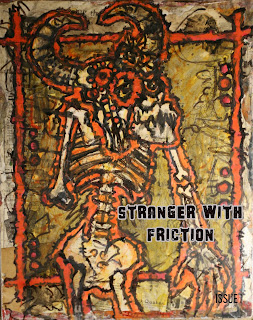 Our second subscription service will be a lot more comprehensive; every book we release in 2022, including four issues of Stranger With Friction. We've had an amazing 2021 with the books we've released and the positive reactions from critics and readers. Subscribers will get exclusive goodies, early previews of releases, chances to win exclusive merch, and more. Part of this subscription will include seven books that I can't reveal the details on, but we're releasing six new editions of some books by one author that I LOVE and those reprints will be followed by a brand new seventh book. At this point, we have about 4-6 other new releases dropping as well, including our new anthology, which we'll be announcing an open call for in January! 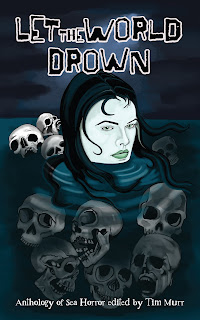 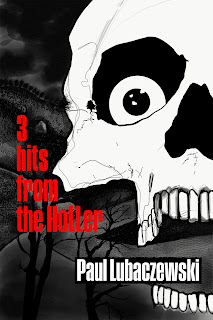 In just a couple short weeks LET THE WORLD DROWN: AN ANTHOLOGY OF SEA HORROR from St Rooster Books will go live! Here's a first look at the cover and the table of contents. The cover is by our Stephanie Murr, who has done the majority of our covers as well the interior art for Thomas R Clark's The God Provides. 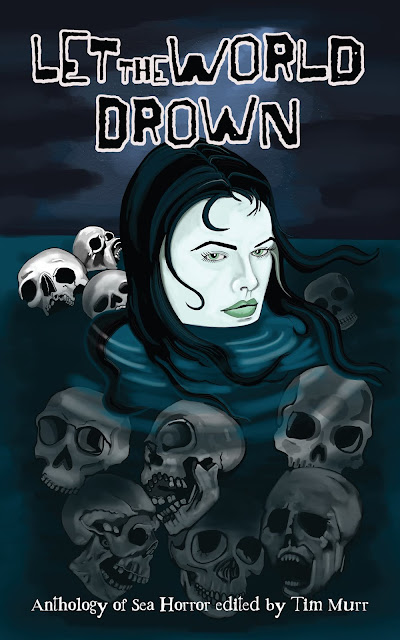 A Beast of Unknown Origin…Carter Johnson

THE GOD PROVIDES IS OUT NOW! 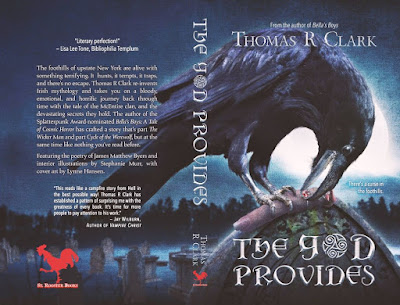 The latest book from Thomas R Clark, the author of Bella's Boys and The Death List, has just unleashed his newest, wildly imaginative, and terrifying epic through St Rooster Books and is already wracking up the 5 star reviews!

The foothills of Upstate New York are alive with something terrifying. It hunts, it tempts, it traps, and there’s no escape. Thomas R Clark re-invents Irish Mythology and takes you on a bloody, emotional, and horrific journey back through time with the tale of the McEntire clan, and the devastating secrets they hold. The author of the Splatterpunk Awards nominated Bella’s Boys: A Tale of Cosmic Horror has crafted a story that’s part The Wicker Man and part Cycle of the Werewolf, but at the same time like nothing you’ve read before.

Available through Amazon in paperback and the Kindle and through Barnes & Noble in paperback, hardcover, and The Nook. (as of posting this the B&N editions are still processing, but The Nook version works just fine.) Get your copy HERE.