WHO'S COLLAPSING NEW BUILDINGS THESE DAYS?

Japanese director Sogo Ishii (now called Gakuryu Ishii) is credited for kickstarting the Japanese Cyberpunk movement in the early 80's with films like Burst City. But I just learned that a few minutes ago. In fact I never heard of Sogo Ishii, until I did a google search for Einsturzende Neubauten's film 1/2 Mensch (or Halber Mensch). Now, after watching the trailer for Burst City, I NEED to watch his films. Here, enjoy the trailer...

Anyway, as I said, I was looking up Einsturzende Neubauten's 1/2 Mensch, because I got into a conversation about it and The Road To God Knows Where with my wife while we were discussing 20,000 Days on Earth. All three films are connected to Nick Cave (because Blixa Bargeld from EN was in The Bad Seeds in The Road To God Knows Where). All three films are visually arresting, but 1/2 Mensch is head and shoulders above the other two as far as pure entertainment.
I found the VHS for 1/2 Mensch while I was working at Garage Video (RIP) in Brighton, MA. I had just purchased EN's Kollaps within the previous month and it was a great city album that I played a lot while walking around Boston. So finding the video buried in a stack in the back of the store was an exciting moment.
The film was shot during EN's 1985 tour of Japan and mixed concert footage and music videos into a heady hour long cocktail of visual/aural ecstasy.
The above scene really captures the clash of German/Japanese punk/industrial cultures. If you can't track down the 2005 DVD, it's all up on Youtube and the songs are all from the album Halber Mensch.
EN formed in West Berlin in 1980 and had a big impact on artists like Nick Cave. Calling them an Industrial band may be more appropriate than any other band of that genre, since they incorporated scrap metal and building tools into their music. They made abrasive music all the more so, to my ears, because the songs are in German. So I never knew what the songs were about, but it didn't matter. The mechanical nihilism was quite the soundtrack for a frozen city life.
(Tanz Bebil)
There are American groups, like Big Black, Swans and Killdozer, who come to mind when looking for comparisons, but EN have an added level of performance art that set them apart. Cave wrote a great piece called Thistle Through My Soul about EN's influence on him, which appears in his book King Ink I (from 2.13.61).
I don't see a whole lot of experimentation from bands out there these days and I don't mean music isn't good anymore. In fact, I think Metal has never been better, though punk needs a shot of adrenline, and industrial has been absorbed or watered down by other genres. What I mean is a band like Einsturzende Neubauten or Swans haven't really popped up in a long time and we could use a good status quo ball kicking.
Anybody have any recommendations? Because I'll be the first to admit that I miss things and lately the only albums I'm getting sent to review have been Metal and Grindcore, which have been great, but I also listen to Glenn Branca, Townes Van Zandt, John Zorn, Lydia Lunch, Mortals, Charlie Rich, Art Blakey, Black Flag, 7 Year Bitch, Lucinda Williams, Gun Club, George Jones...in other words, my album collection is a mess and I like it like that! One reason I stopped buying punk albums for a while was because every new album I picked up sounded like a B- effort from Bad Religion or NOFX. F'ing yawn.
So who's pushing the envelope these days?

(from the press release)

Philadelphia-based speed metal grinders DRONES FOR QUEENS have announced their upcoming 7inch "Practically Weapons", will be released March 10, 2015 via Riff Lifter Media.  The 4-song EP will be pressed on white vinyl and limited to 300 copies.  Pre-orders are available here."Practically Weapons" was recorded in Aug 2014 by Steve Roche  (Stinking Lizaveta, Rat Healer, Nightfall, Witch Hunt, Serpent Throne) at Permanent Hearing Damage in Philadelphia.  The EP was then mastered by Dan Randall at Mammoth Sound Mastering.Featuring ex-members of Woe, Woods of Ypres, and current members of The Green Evening Requiem, Population Zero, and Dirt Worshipper, DRONES FOR QUEENS previously released a split 7” out with Occult 45, as well as a cassette EP ("Health") in 2012.  Their music has been described as "hard hitting D-Beat with complex riffage" (New Noise Magazine), "blistering double-kick drumming, and a strong melodic sensibility"(Exclaim), "hard hitting, hook laden music that takes no prisoners" (The Monolith), and as a "solid mix of metal and punk with traditional elements combined with some emerging nuances" (Blow The Scene).Drones For Queens is comprised of guitarist/vocalist Shane Madden, drummer Evan Madden, and bassist Bob Stokes.  The band will announce US tour dates later this year.For more information visit:www.rifflifter.comwww.facebook.com/dronesforqueens 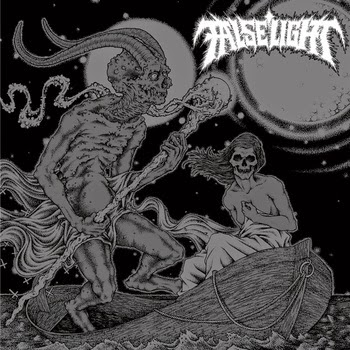 South Carolina is not the first state that springs to mind when I think crust/grindcore, but Charleston has spewed forth False Light. In true grind tradition the songs on Forced by Flame are short and brutal, but well executed and exciting. I went back and listened to False Light's self titled debut for comparison and Forced By Flame is a sure footed evolution from an already kick ass band.

False Light jams thirteen tracks onto this 7", full of rage and distress. This is the soundtrack to a mental breakdown. And, I imagine, some pretty scary pits.

You can check out Forced by Flame on Bandcamp here and order the 7" here from Headfirst Records. One reason for owning a physical copy? Look to the left at this sick cover!

Review; THE APEX DEBUTS WITH AN EXTREME/TECH METAL AURAL BARRAGE 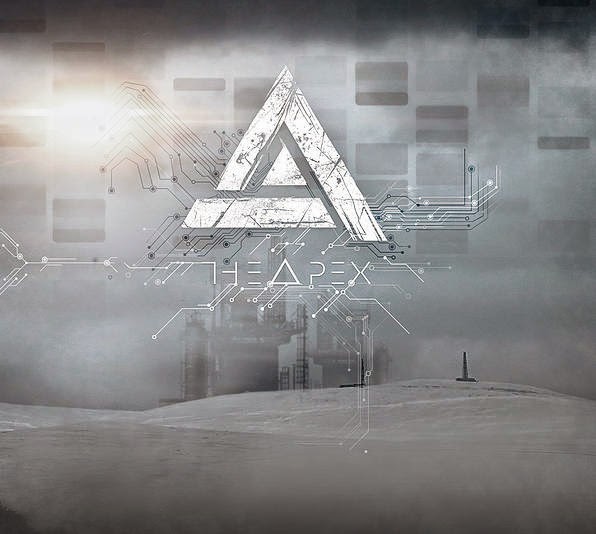 It sounds like a fight or at least the sound track to one. Beyond that I'm almost at a loss for what to say about The Apex's debut album...almost. The purpose of an album review is to tell you whether or not you should buy an album, but it's ridiculous to judge art this way. I find this especially true when reviewing metal/hardcore/punk bands who live on the more extreme fringes of their genres. Bands like The Apex offer a challenge. They raise eyebrows. Art this confrontational is polarizing. Which is good.
The biggest comparisons The Apex get are to Meshuggah and early Dillinger Escape Plan, not too shabby, and I don't disagree. There's a consistency to this album in it's intensity from song to song, meaning there's no space to breath, even when the tempo slows down. Vocalist Darren M. keeps you cornered from start to finish like a pitbull hulking out. Musically, The Apex are tight and on point. You can't take anything away from them. For proof, hit the link here. 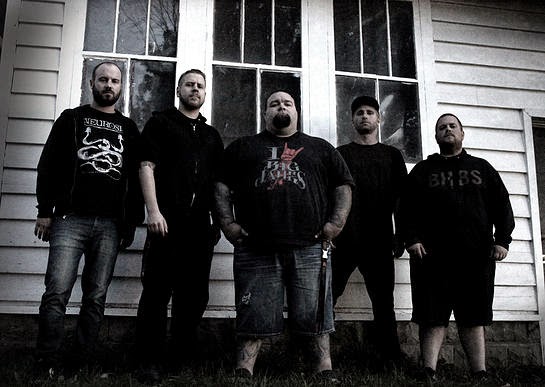 For fans of extreme metal, The Apex is a band worth following and I can't wait to see what they do next. My favorite tracks are Attack, If Detroit River Could Speak, and The Girl Death Left Behind.

So I missed Voivod playing with Napalm Death on their most recent tour, so this morning you get an all Voivod Sound Attack...You're welcome! 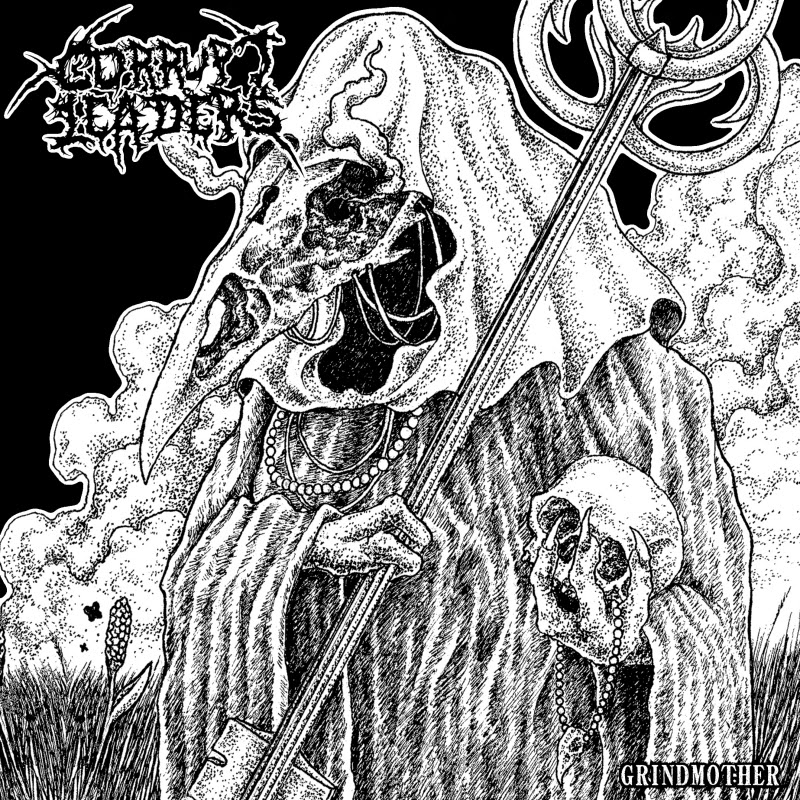 Ontario's grindcore heroes Corrupt Leaders have a new EP that kicks you in the ass and leaves faster than most bands get started. Four tracks and the longest one is 50 seconds. This sucks, because these four songs are fantastic and could use about twenty friends for a truly satisfying experience. DO NOT LET THIS DETER YOU FROM DOWNLOADING THIS EP NOW AND/OR BUYING THE 5" WHEN ITS RELEASED IN APRIL!
Comparing it to their first EP (s/t) I'm not sure if Grindmother is an evolution or de-evolution for Corrupt Leaders. On the debut the songs stretch from a little over a minute to a near prog-rocking three minutes. Grindmother takes all the debut's rage and fire and boils it down to it's white hot essence. The band as a whole is tight, but I have to give it the rhythm section for standing out in this blur of sonic fury.
Grindmother is a true aural assault even in it's brevity and check out that witchy album cover!

Here's my favorite track on the album, "Beaten Path"!
Follow the link above for Corrupt Leader's Bandcamp page. Also available there is the split EP with Dogma.