OK, trying something new...I'm going to be posting parts of my in-progress new novel, Spellbreaker. I won't be posting the whole book here, but I'll regularly put up bits and pieces. Hopefully you'll be hooked! I'd love to get your feedback over the next few months, how you feel, what's working for you, etc.
ZERO CASE from SPELLBREAKER
(Copyright Tim Murr/ St Rooster Books 2015/16)


The newest of the Spellbreakers  was a 24 year old woman named Texas Hill. Named that by her father, Alan,  after she was born in Detroit instead of back home in Fort Worth. Alan designed show and racing cars. Texas grew up fairly normal. She, her brother, Gary, and mother Gabriella would travel around the country with Alan. Cars were her world. Alan built vehicles for big Hollywood movies and unique personal cars for movie and sports stars.

Gary was four years older than Texas and a gear head himself. He built his first racecar from a kit and joined the dirt track circuit. His car was inspired by punk rock and Racer X from Speed Racer. He made himself into a ‘character racer’ and was a favorite with kids-including his little sister.

When she was old enough, Gary helped Texas design and build her own car (a garish pink body with a neon green silhouette of the state of Texas on the hood). The two of them were very popular and inspired other drivers to add theatrics to their suits and/or cars. Some complained that circuit was becoming a bit too pro-wrestling, but no one turned down the money. Gary and Alan developed a web series showing the Saturday night races and interviews with the drivers. Texas was the undisputed star and her pink and neon green t shirts with the slogan ‘DON’T #%$! WITH TEXAS’ sold all over the country.

It was at a party out at the doom metal band Troll Wolf’s house. Troll Wolf had bought a small run down farm house out in the middle of no where (reminded them of the house in Texas Chainsaw Massacre) and turned it into a home/recording studio. They could also grow weed without molestation from the law. Troll Wolf held monthly parties that grew over time from about ten guests to a couple hundred. Texas had been dating the singer/rhythm guitarist Smoke for almost a year when she and Gary drove up for the big Halloween bash. It was early in the afternoon and the band, some girlfriends, and a few pals were getting the place ready and running power cords out to the amps on the make shift stage. Within a few hours the neighboring field would full of cars and the property would be crawling with punks and metal heads in costumes. Texas came dressed as Velma from Scooby Doo. Gary was Samhain-era Danzig, shirtless and covered in blood.

Nothing was out of the ordinary that day. Beer flowed like a river, the air was thick with smoke of the sweet leaf, and by the time the sun went down the crowd was one hundred strong. Troll Wolf stumbled on stage and started banging through a sloppy set full of Halloween themed covers and originals. There was a bonfire on the front lawn and the scarecrows that had been hung from the dead oak were being set on fire. In the field you didn’t have to walk far to see a car bouncing with fogged up windows. More than a few fights broke out, but nothing that couldn’t be contained. More beer arrived with every new car. All in all it was a great Halloween.

Between songs someone started screaming. She may have been screaming before that, but no one heard until the applause died down. Even then it took a while before people started becoming curious.

A skinny blonde girl dressed as a sexy angel came running/ limping from the field covered in blood screaming for help. At first people parted, afraid to touch her. Then they gathered around trying to help her, but she wasn’t saying anything that made sense. She just kept screaming about her boyfriend. Finally, Gary and a few big guys started running in the direction she was pointing. It was near the edge of the field that they saw a hulking beast eating out of a young man’s gut. He was laid across the hood of a car and obviously dead.

It was dark back there, but there was just enough light to see what was eating the man was neither human nor animal. Gary and the four guys who arrived first stopped about ten feet away, with a few more people coming up slowly behind.

The beast looked up at the gathering crowd, who all took a step back at the sight of it’s glowing red eyes. The beast rose to its full height of nearly eight feet and screamed at them. Many people fled, but Gary and the first four stood their ground.

Texas pushed her way through the fleeing guests, trying to check on Gary, with Smoke and the other members of Troll Wolf with her. Smoke had grabbed a machete, which he kept near the garden for snakes.

The beast was slowly approaching the group that had grown to ten strong, with everyone clumped several yards back, turning on headlights and flashlights to get a better look. Smoke waved the machete and yelled for it to get back, but the beast just chuckled.

It started to pace back and forth, sizing up the group. Texas felt flush and a little dizzy, sound started to become muffled for her. Then, there was a voice from out in the darkness.

The beast spun around surprised, then bolted straight for Texas. She screamed and threw her arms up and there was a flash of lightning that hit the beast, blasting him a hard left through a car.

The first thing Texas saw when she opened her eyes was a man in black clothes, purple sneakers, sweaty and out of breath and carrying a sword. She looked over at the smoldering remains of the car and the beast staggering to its feet, smoking.

“You!” The man with the sword shouted. “Stay right there!”

Then he sprinted at the beast and swung the sword into its neck, decapitating it.
Posted by Tim Murr at 6:19 PM No comments:

There's not a lot of films coming out that really keep the legacy of Giallo alive, at least not that I've seen, other than an occasional gem like The Strange Color Of Your Body's Tears (2013). The Strange Color... is a lush and mesmerizing film that gives the architects and masters of Giallo a run for their money. Instead, I've been seeing the influence of Bava and Argento showing up in music videos.
I've compiled a short list of some of the cooler ones I've come across. I can't say that I'm a huge fan of all the bands, some of the music isn't the kind of thing I'd listen to much or at all, but the videos are all really cool and worthy of a few minutes of your time.


Slow Coda "Valspeak"
(might owe a little more to American 80s slashers, but watch the way the camera moves)
Harrison Kipner "Monster"
(Very much calls to mind Suspiria, because of the dancers, but the overall visuals are pretty cool.)
Johnny Butler and Dani Mara "Darkness (Mater Tenebrarum)"
(Video isn't available on Youtube, but worth a click on the link below
http://www.brooklynvegan.com/darkness-video-premiere/ )
Lioness "The Night"
(More poppy than I usually listen to, but the song started growing on me. Crazy witch action.)
Huntress "Sorrow"
(Granted the reference to Karnstein is pure Hammer Horror, the visuals owe more to Mario Bava)
Arcana 13 "Dread Ritual"
(Pure classic Bava)
Ghostface Killah "Rise Of The Ghostface Killah"
(Possibly the coolest video on this list, no joke. Wu Tang Clan, even solo, is NEVER something to fuck with!)
Coliseum "Black Magic Punks"
(Love, love, love this song. The video very much calls to mind Argento's Three Mother films.)

No doubt there's plenty more that I can't remember or haven't seen. Feel free to make suggestions in the comments or to me on Twitter @Holyrooster. If we come up with enough names, I'll run a second playlist!
Posted by Tim Murr at 3:30 PM No comments: 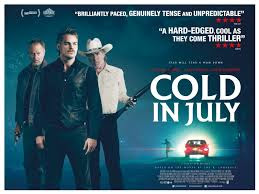 Even though it came out at the end of 2014, I just got to see Jim Mickle's Cold In July. Based on the novel by Joe R Lansdale (Bubba Ho Tep, Paradise Sky, Hap And Leonard novels), Cold In July is a tale of two fathers, one protective and loving/one an ex-con with revenge on his mind. Things get complicated. The film was written by Nick Damici and Mickle. You may know Damici, who also co-stars in Cold, in Mickle's Stake Land and Adrian Garcia Bogliano's Late Phases.
I'm actually glad there was such a lag before I got to see Cold, because I definitely would have been re-writing parts of my last book. That said, a violent Jim Mickle film co-starring Don Johnson has been high on my list of must sees. Mickle's previous films, Stake Land and We Are What We Are are modern classics and two of my favorite films.
In addition to Damici and Johnson Cold also stars Michael C Hall (Dexter, Six Feet Under) and Sam Shepard (All The Pretty Horses, Blackhawk Down). The film is set in 1989 and opens with Dane's (Hall) home being broken into. Dane goes for his gun and winds up shooting the burglar by accident. It's a pretty clear cut case of a man defending his home and family and Sheriff Price (Damici) reassures Dane that the man he shot, Freddy Russell, is a wanted felon and a piece of shit. All should be fine, except that Freddy's father, Ben (Shepard) has just been paroled and wastes no time letting Dane know that his son is in danger now. The movie has barely started and Mickle and company are laying on the tension so thick. It calls to mind the most harrowing moments of Scorcese's Cape Fear or Saulnier's Blue Ruin.
Again, we're not even halfway through the movie and we're on a fast train to every parent's worst nightmare and the real story hasn't even started yet! I don't want to give away too many of the surprises, twists, and turns of Cold In July, because it really is a very rewarding and exciting film.
The score by Jeff Grace is fantastic and really adds a John Carpenter feel to the movie, in fact, I just saw on Twitter describe the movie as John Carpenter making Blood Simple. I can't disagree and I'd throw a comparison to Sam Peckinpah at the height of his power (Straw Dogs or Bring Me The Head Of Alfredo Garcia). The cinematography is gorgeous as well.
For the fact that Cold wastes no time in getting it's hands dirty, Mickle keeps a tight reign on the pace. He balances a slow burn with a lot of action. In an age of CGI fight scenes, to see a violent shoot out unfold at slow realistic pace is almost unnerving. Mickle has an amazing power behind the camera and I think people are going to be talking about him decades from now in the same breath as the aforementioned masters.
Also, you're going to be surprised how much you've missed Don Johnson!