LOOKING BACK AT DAVID BOWIE'S LOW 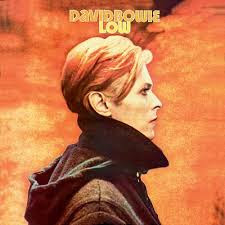 David Bowie went back to his home planet almost a week ago and there have been many people come forward with beautiful things to say about this great man who towered over rock and roll. A giant among giants who's influence will never be erased.
I've spent the week listening to three albums; 1972's Rise and Fall of Ziggy Stardust and the Spiders From Mars and 1977's Low and "Heroes". Bowie was one of those artists like, Elvis Presley, The Beatles, or Johnny Cash that was just always in my life either through the radio or television and I don't remember becoming a "fan" of any of them they were just a natural part of my life. In a way, I took Bowie for granted for years. I was always happy to hear him on the radio, regardless of era, but he wasn't an artist I obsessively sought out, like Black Flag or Townes Van Zandt, until I heard "Heroes".
I was twenty two and living in Boston. I'd gotten a job at Waterstones Book store, on Exeter St. working in the receiving department. Whoever occupied my table before me had left behind a small stack of CDs which included Marvin Gaye, Roy Orbinson, a Motown compilation, and Bowie's "Heroes". Bowie really surprised me. "Heroes" had such a vital sound-artistically rich, but with a pop sheen. I knew I needed to start taking Bowie as seriously I took Lou Reed.
My next purchase was the Rykodisc double cassette Best Of, which accompanied me on many train rides to and from work. What I learned about Bowie was that he brought a sheer joy and exuberance to playing rock and roll which other artists lacked. Not to take away from anyone's songwriting abilities or their albums' production values, but Bowie wasn't to cool to smile through the music. That was refreshing and was always a good palette cleanser after a lot of the hardcore, blues, and doom metal I usually listened to.
It took me awhile to finally land on one of his albums that I'd call my favorite, but Low was it. Recorded the same year as "Heroes", Low is part of the Berlin trilogy that also includes Lodger. 1977 was a pretty crazy year for Bowie and long time friend Iggy Pop as they worked on each other's albums and recorded Pop's The Idiot and Lust For Life the same year as "Heroes" and Low. We're talking about four of the best albums made by either artist crafted in less than a year!
One of the things that set Low apart was the synth/electronic b-side that was mostly instrumental. The a-side featured some very good songs that are like little sci-fi character dramas (the sci-fi aspect being provided by the Kraut rock influence of synthesizer music). Be My Wife was released as a single and was the most classic Bowie sounding rock song on the album. The rest of the album is much more avant garde than anything Bowie had attempted up to that point, and despite what some critics thought, it was a great success. Partly because the album had a secret weapon in Brian Eno of Roxy Music providing much of the synth sounds. I can't say I've ever been a huge Eno fan, but I certainly have a great appreciation of him on Low.
When the news of Bowie passing hit, Low became my go to album. The last one, Blackstar, is amazing, and I enjoyed listening to it last Saturday morning while I was writing, but I think I'll take a little more time before I return to it. Low has a hopefulness to it that has been a great comfort, even in the more down beat instrumentals and lines like "Sometimes it gets so lonely...". In my head Low creates a whole world in it's seven tracks, as complete as a JG Ballard novel. There's not a hell of a lot of other rockers that have accomplished as much as Bowie and stayed good and vital for as long as he did. His shoes are just too damn big to ever be filled by the Fall Out Boys and Kanyes of this world.

MY HEROES HAVE ALWAYS BEEN MONSTERS PART 46; TAXI DRIVER TURNS 40 THIS YEAR

"Did anyone prophesize these people?
Only Travis"
-Red Angel Dragnet by The Clash 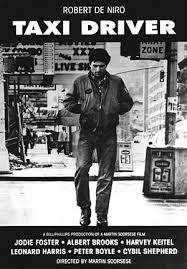 Martin Scorsese's masterpiece, Taxi Driver, debuted on Febuary 8th 1976, the same year David Berkowitz aka the Son of Sam started his killing spree in New York City. There were also a total of 1,600 murders in the city that year (in 1980 there would be 1,814 and in 1990 2,245!!) The city was still suffering from the 1975 fiscal crisis which would eventually lead to the 25 hour black out in 1977 which lead to looting, arson and murder. Then there was the heroin and crack and a massive decrease in police presence which made an already violent city more terrifying.
Taxi Driver was about one man in that city. A man who claimed he would not take it anymore. A man that would stand up to the scum, the filth. But Travis Bickle (Robert DeNiro), he was no hero. Travis Bickle was a sick man. A man suffering from post traumatic stress disorder from his time in Vietnam, but there's no sense in Taxi Driver that Bickle wasn't already touched with a bit of darkness before he shipped out from boot camp. Not to say Bickle lacked a moral center, on the contrary, he knew the difference between right and wrong and firmly believed in his rightness. He was no junky, dealer, pimp, fairy, creep, whatever. He was a man who could not take it anymore. A man who dreamt of the day a real rain would come and wash all the filth off the street.
There are two distinct stories intertwining in Taxi Driver. One, is the story of Travis the fed up taxi driver, who after a chance encounter with a 13 year old prostitute, Iris (Jody Foster), decides it's his duty to rescue her from this scumbag pimp named Sport (Harvey Keitel). Travis purchases guns from a black market dealer to become a hero vigilante. The second, is the story of Travis the lonely Taxi driver who meets the angelic Betsy (Cybill Shepard). He falls for her hard, but after a disastrous first date she never wants to see him again. He's so tore up by her flat rejection of him that he purchases guns from a black market dealer, intending to assassinate presidential candidate Charles Palantine, for whom Betsy works for and admires.
The two stories twist around each other like snakes, but Travis also seems outside of his own stories at times. Left alone to narrate his own descent into hell. He floats in and out of the roles of savior and destroyer and doesn't seem to understand that they're not different, they're the same man with the same story. He's "God's lonely man." He's sick, weak and he knows it (like Fyodor Dostoevsky's antagonist in Notes From The Underground) and he has to get better and get stronger, healthier, all the while self-sabotaging all his own efforts.
Even if you haven't seen Taxi Driver you probably know the "You talkin' to me?" bit or have seen the images of a mohawked DeNiro. It was a favorite of The Clash and they quoted a chunk of dialogue in the song that opened this essay. It's a touchstone of cinema and pop culture.
Writer Paul Schrader drew inspiration for the film from the loneliness and depression he felt driving around all night after his divorce. He was also influenced by the aforementioned Notes From the Underground. Notes and Taxi Driver are both related to the audience by the a first person narrative, men who are not well with the world. Bitter outcasts who fantasize revenge. Schrader saw the taxi 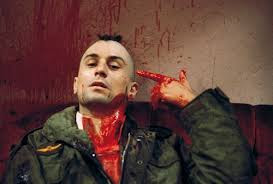 driver as good metaphor for loneliness and knocked out the screenplay in less than a month. Scorsese landed the directing job after his stellar work on Mean Streets, which also starred DeNiro and Keitel. Neither Schrader or Scorsese set out to make a horror film, and some will argue Taxi Driver's ties to the genre, but the end result is a work of urban horror that's closer to Henry; Portrait of a Serial Killer than Goodfellas. Taxi Driver is certainly a film, regardless of how you'd categorize it, that many horror fans can latch on to, like Apocalypse Now, The Warriors, or Class of 1984, that take cues, consciously or not, from the horror genre. And in turn Taxi Driver's influence crosses genre boundaries. I've seen horror films that wish their violence was as effective as the last several minutes of Taxi Driver. Also, something else that ties it to the horror genre is Bernard Herrmann's amazing score. You may know Herrmann also scored Hitchcock's Psycho.

Taxi Driver is as close to perfect a a film can get. It's meticulous in its world building and portrayal of the darker aspects of the human soul. All the stars really go above and beyond in their roles, even supporting characters played by Albert Brooks, Peter Boyle and Scorsese himself are essential pieces to this amazing puzzle. 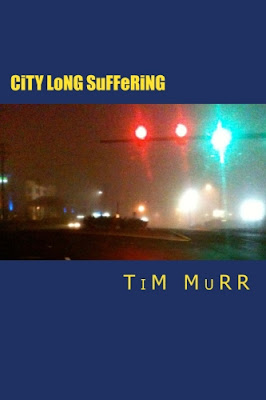 Hey, fiends! Here's an excerpt from from latest book, City Long Suffering. If you like what you read you can get the e-book HERE for $3.99 and the physical book HERE for$11.99.
The afternoon was wearing down when Robert pulled into a large gas station. As he unscrewed the cap he scanned the parking lot and street and saw the Camaro from earlier in the day driving by slowly from the direction they’d just come. It pulled into the parking lot of a grocery store across the street. The driver parked by the entrance, but the engine was still running. By the time the gas tank was full the occupants had still not gotten out. Robert replaced the cap and slid back behind the wheel, watching the rear view mirror.


Ann went through her contacts and found Sergeant Daily’s name and hit ‘call’.
Posted by Tim Murr at 4:20 PM No comments: