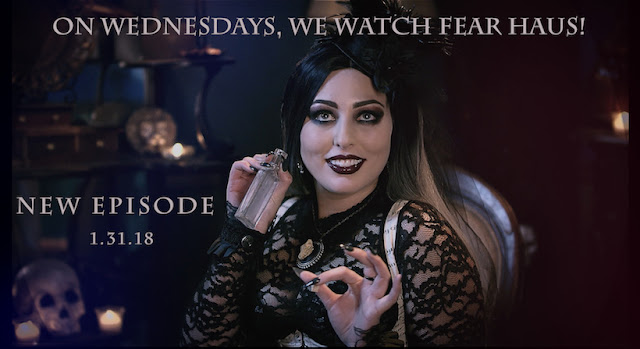 Dear Gore Hounds, where will you be January 31, 2018, at 1pm? Watching Fear Haus with your favorite devilish hostess Blair Bathory, of course! Miss Bathory and producer Drew Sawyer have spent the last year working on the return of their Fear Haus series, which updates the grand old tradition of the anthology series and the horror host/hostess. The show presents short films, both domestic and international, which Bathory curates and hosts. 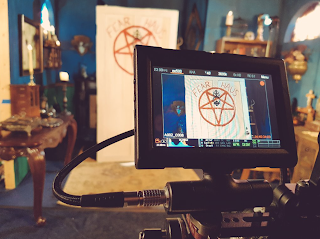 Directors Molly Coffee and Gigi Saul Guerrero, with Luchagore Productions(!), have created six episodes each as part of the 'fearmaker' program, where guest directors conceptualize wrap-arounds for the series. (In addition to her own short films, Coffee has been the production designer on Stan Against Evil and the V/H/S Viral segment "Dante the Great," among many others and Guerrero has, among other things, directed El Gigante and "Dia De Los Muertos," the closing segment of Mexico Barbaro.) 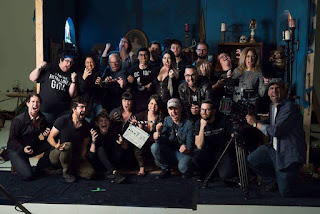 So on the January 31st premier, Scottish director Andy Stewart will lead the charge of the first episode of the new year with his short film "Ink." Make sure you eat a BIG lunch before watching this cool film about a man and his...collection. Don't want to spoil anything, but I really dug "Ink." A little body horror, a little splatter punk, a little character drama-shot with the right balance of grit and professionalism, with some truly beautiful moments.

Find Fear Haus at www.facebook.com/thefearhaus to watch the latest episodes and follow Fear Haus on Twitter to never miss an update!

To tide you over, let me take you back to episode 6 with the short film "Picket," directed by the power house Izzy Lee and starring the great Diana Porter...

"...But I reserve the right to be angry at bullies of all sorts-wife-beaters, dog kickers, bosses, politicians, murderers-and try to expose them for the small minded shits they are. That's the anger part. But I've also been lucky in love. I've loved and been loved by some fine, generous people and not a few four-legged beasts to boot, and they provide the contrast-the vast contrast-the solace and the peace." Jack Ketchum said that in an interview with Florence Kremmel in the sole issue of Famous Monsters Underground in 2011. It followed an interview with director Lucky McKee and producer Andrew Van Den Houten, conducted by Kristy Jett. What the interviews had in common was the film The Woman. It was a sequel to Van Den Houten's The Offspring, and both were based on books by Ketchum (McKee co-wrote The Woman.) When I read these interviews back in the summer of '11, I was only aware of McKee's May. I was surprised to learn of a horror writer, that was certainly not knew, and had several books out, and I had never heard of him. Back in small town, as a kid, working my way through my libraries horror section, I certainly don't remember coming across his name and even now, my local book stores never have any of his titles. Not that it would have mattered, I guess. As impressed as I was with what all three men had to say about their project(s), my biggest sticking point was the fact that The Woman was a rape revenge story. Ever since I watched I Spit on Your Grave and Last House on the Left in high school, I haven't been able to watch any film in the rape revenge genre, and usually have to look away when a rape occurs in other movies. Death Wish didn't initially set me off when I saw it in 7th grade, but it took me up to this week to return to it, and I didn't fucking enjoy a second of it.

I didn't think the filmmakers had made an exploitation film or that their motivations for telling such a story were not noble, but I felt like I already know rape is evil, so I don't need to sit through a movie with that message. Then I happened upon Ketchum and McKee's The Girl Next Door, in the middle of the night on Chiller and it was so upsetting I was almost in tears and didn't finish watching it. I threw my hands up and said, ya know what fellas...your stuff ain't for me. I'm glad you're out there and I respect you, but...I'm good. But The Woman followed me. Every time I went into my streaming queue, it came up as a suggestion and always seemed available. And I never forgot how much I liked Ketchum in that interview, but I knew if I was ever going to watch it (and I was imaging it to be some brutal torture porn that would put me through an emotional wringer), I would need to be alone. My wife is willing to watch an awful lot of things with me, even though she's not as obsessed with horror films as I am, so I never want to cross certain lines with the more fucked up titles.

Then Ketchum passed away this past week, and I saw a number of my friends posting about what an amazing writer he was and what a nice guy. They posted pictures with him and talked about his influence. I thought, shit, that sucks. We keep losing the good guys. So, last night, after my family had all gone off to bed, I put on The Woman. It was time.

As I said, The Woman is a sequel to The Offspring, which I haven't seen, but I found that didn't effect my understanding of this film. It opens with 'The Woman,' played by Pollyanna McIntosh (Hap and Leonard, The Walking Dead), seeking shelter and tending a wound on her belly. The film becomes dreamlike with her running through the forest, stalking prey, and circling a baby with a seemingly domesticated wolf. Next we meet the Cleek family, the father Chris (Sean Bridges, Jug Face), the mother Belle (Angela Bettis, May), the oldest daughter Peggy (Lauren Ashley Carter, Jug Face, Darling), the son Brian (Zach Rand, Nurse Jackie), and the youngest daughter Darlin' (Shyla Molhusen). The Cleeks are an affluent white family living in a small town. Chris is a lawyer and a hunter while Belle is a housewife. Peggy and Brian are both having trouble at school, but Brian is doing a better job of covering it up, while engaging in some increasingly disturbing behavior there and at home. Peggy seems ill and terrified all the time and her geometry teacher, Miss Raton (Carlee Baker, Wicked Lake), seems to be the only one who notices enough to care. While hunting, Chris finds The Woman and returns home, clears out his cellar, and installs restraints, before going back out to capture her and bring her home. He presents The Woman to his whole family as if it were the most normal thing in the world, telling them that they are going to take care of her and tame her, because they can't have some wild woman running around in their woods. Belle and Peggy seemed mortified, maybe even shattered by Chris's big reveal, but Brian is disturbingly into it, while young Darlin' just goes along with a sunny smile, too young to understand the implications of what her father has done.


I don't want to give anything else away, not because of some unpredictable twist, but because the characters' story arcs are so interesting, I think going in with the barest amount of information is best. I will say that there is a rape scene, committed by Chris and a torture scen 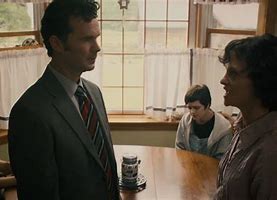 e committed by Brian. Neither are particularly graphic, but they're upsetting nonetheless. I actually fast forwarded through the rape. Fortunately, the film is no where near as brutal as I expected, instead it's an amazing character study in abuse and control. McIntosh, Bettis, and Carter-and to slightly lesser extent, Baker- all play roles that represent varying types of abuse; physical, mental, emotional, and sexual. It's not sexually graphic or exploitative, like Last House, and it's not even very gory, although the climax is very harrowing and bloody. The Woman is a psychological deep dive with a great cast. I'm sorry I waited so long to finally watch it, but I'd still cautiously recommend it, especially for what it may trigger in some viewers.

In that interview above, Ketchum commented, "Lucky and I are asking, who's worse? Cannibal or lawyer? Cannibal or complicit wife? We're pointing our fingers at the nuclear family and what sometimes goes on there...We're asking kids not to hide what goes on between mom and dad or dad and little sister. We're asking people to not tolerate victimization, to get free, get out into the big scary world, rather than live under someone else's thumb." Considering the flood of sexual assault accusations we've seen come to light in the last year in Hollywood and Washington DC, I think that message has come to fruition in a big way and the real life Chris Cleeks of the world, the Harvey Weinsteins, the Steve Wynns, the Kevin Spaceys, are finally getting their black hearts ripped out and there are more coming, and Donald Trump will have his day, as bullet proof as he believes he is. When The Woman has her moment, she isn't just getting revenge against one rich redneck family, she's dealing a blow to the patriarchy in a small way, as does the film, which I think is even more relevant seven years after its release.