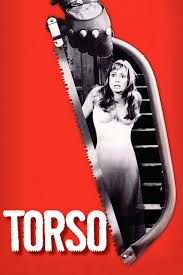 Italian director Sergio Martino's work has been a major blind spot for me. One of the great things about streaming services and DVD/Blu Ray companies like Arrow and Scream Factory has been remedying a lot of my blind spots. My in road to Martino was the re-release of 1972's Your Vice Is A Locked Room And Only I Have The Key. It was loosely based on Edgar Allan Poe's "The Black Cat" (Arrow paired the film in a box set with Lucio Fulci's The Black Cat) and starred Edwige Fenech, Anita Strindberg, and Luigi Pistilli. It's a spectacularly sleazy romp, but also artfully directed and well worth tracking down.

Martino's 1973 film Torso is almost better in my opinion, but has some major issues that really bog it down in the second half. As a Giallo it hits all the major points; you have a mysterious killer, lots of suspects and red herrings, beautifully shot, with lots of bloody violence and eroticism. Torso is somewhat less stylish than Blood And Black Lace (1964, Mario Bava) or Deep Red (1975, Dario Argento), but has a grittier feel, closer to an American slasher film. The killer, which we fully see earlier than in some Giallos, wears a mask that's somewhat remeniscent to the proto-slasher The Town That Dreaded Sundown.

Martino's shooting style is fantastic. The camera is always busy, but never distracting, giving many of the scenes a delirious momentum. I have to admit, I never had Torso very high on my watch list, assuming it was just an exploitation, lady-killer flick. Which it is, but artfully done. It stars Suzy Kendall (The Bird With The Crystal Plumage), Tina Aumont (Two Orphan Vampires), Luc Merenda (Le Mans), and John Richardson (Black Sunday) and was written by Martino and Ernesto Gastaldi (The Case Of The Bloody Iris).

The story centers on a series of brutal strangulations and mutilations, that are sexual in nature, around the University of Perugia. The story moves to a country villa, with four friends getting away for a holiday, but they're followed by the killer. Along the way we get lots of sex and nudity, brutal kills, and occasional doll imagery. The film, really, is all aesthetic with little substance, a charge that could be often leveled at Argento.

There is a cringe-factor with the level of misogyny present in the murders though, but nothing approaching Fulci's New York Ripper, which for me was a film that actually bordered on being anti-woman (I'm not calling Fulci a misogynist, based on what I've read about him, I don't think he was, however New York Ripper is fucking repugnant and represents the absolute worst that slashers and Giallo have to offer), for instance in the first kill of the film, after strangling a woman, who just finished having sex in a car, the killer takes his knife and carves off her breast, after feeling her up. He does this later, when he follows a woman in danger of being gang raped by two other men.

Honestly, these issues can't be waved off or simply ignored just because a film is thirty, forty, or fifty years old. A film like Torso is more than just sordid entertainment, it's the product of a culture of misogyny, as the later slashers were products of repression and conservative lock down. Unlike the slasher film, we don't have a "final girl," though Jane (Kendall) appears to be one, she's actually just the one that survived long enough for a man to show up and save her.

Jane is robbed of agency and justice. Compare her to Nancy in A Nightmare On Elm Street. Laurie in Halloween, or Jenny in Friday The 13th Part 2-Jane doesn't confront the killer and stop him, she's trapped and toyed with until a man from the village arrives and interrupts her murder. He's the one that pursues the killer, he's the one that ends the terror, while Jane stands by in shock being rescued. On the other hand, the women in the film are independent and sexually free. They don't go off on holiday with boyfriends, but alone and are confident in their own skin, but are they? The film is written by a men, directed by a man, and appeals to the male gaze in spades. We might excuse films that are less than sensitive when it comes to dealing with sexual politics, race, and/or homosexuality, but with Torso we're talking 1973 and within a year we get both Black Christmas and Texas Chainsaw Massacre, both of which feature well written, believable female protagonists, that do have agency, that fight back.

Though it predates the American slasher by either one year (Black Christmas) or five years (Halloween) depending on where you believe the slasher film really starts, it has a lot similarities to it's American cousin with the psychology of the killer. His murders are tied to sex, loss, and guilt, which would be the primary instigations in one combination or another for the entire sub-genre. Like Michael Myers and Jason Vorhees, Torso's masked killer shows up to dispatch women and occasionally men after they've had sex, or in the case of a shoe maker, who gets killed for voyeurism. The killer's sexual repression doesn't matter at all up to the point of the reveal, because the movie chugs along freely with little more than a thin murder mystery as it's engine. The raison d'etre is mostly after thought.

I honestly don't know what to do with the casual misogyny in many horror films. For years I shrugged it off, like I'm sure many fans have, and tried to focus my attention on films that had more to offer. I wish I could wrap up on a positive note, as I enjoyed the film while I watched it, but in the end I just can't not be blase about the fact that this is a misogynistic film and shouldn't be let off the hook just because it's old.