This Thanksgiving we bid a sad farewell to one of Italy's great cinematic icons, Daria Nicolodi, actress and writer, and mother to Asia Argento. She wrote the screenplay for her ex-husband's (Dario Argento) film, Suspiria, while going uncredited for the story behind Inferno. She also went uncredited for Luigi Cozzi's 1989 The Black Cat, but was credited for the screenplay to his Paganini Horror. She was primarily known for acting though, appearing in Argento's Deep Red, Phenomena, Tenebre, Opera, and Mother of Tears, as well as Mario Bava's final film, Shock. She had many other film and TV roles through the years and even appeared in Asia's directorial debut Scarlet Diva.

In every role she was magnetic and charming, not to mention lovely. She especially shone bright in Deep Red, where she was funny and fearless, stealing scenes from her co-star David Hemmings. And she certainly had one of the most memorable death scenes in Opera, where the killer put a gun to a peep hole and shot her through the eye.

She leaves this world at the age 70. Our condolences to her friends and family.

Some of you that follow me on social media already know this, but Stranger With Friction is becoming a physical magazine, debuting in about two months from today. I've had a soft open call for the first issue, testing the waters and reaching out to people I often collaborate with and that open call is now closed, but I am looking for new fiction for issue two, which will come out in late April/early May. In addition, I'll be looking for some non-fiction articles on horror movies, punk rock, and outsider literature. Specific details are at the bottom of the page.
When I launched this blog, I only had the vaguest idea of what I wanted to do or how to do it. I was struggling to finish two novels, and all my early efforts at starting an indie publishing house had crashed and burned. I started writing Stranger With Friction at the recommendation of my late friend Jase, who thought it was the very thing I needed to get my writing back on track. I didn't even know what a blog was, but he helped me start my old writing blog, The Path of Most Resistance, but I was always so damn precious with it, it was never any fun and often very forced. Stranger With Friction was supposed to be more fun, but it was also supposed to supplement a physical magazine that would focus on horror, comics, and punk rock, but the magazine never materialized and I became really focused on Stranger for years, building it into a recognizable name, where bands and directors would reach out to me for coverage. My posts started pretty shaky, but I regained my footing and banged out the novels, launching a new publishing imprint, and Stranger helped me get writing gigs with Popshifter, Biff Bam Pop, and Diabolique Magazine. Also, in the mean time, St Rooster Books got bigger, I started publishing anthologies, and this year released two novellas from other writers. I've been so busy the last three years that Stranger has fallen by the way-side, despite my efforts to periodically return to it with either a filmography series, guest posts, the odd "My Heroes Have Always Been Monsters," or the Hardcore Wednesday posts.
Finally launching a magazine brings us full circle and it feels really good. I'll always prefer physical media, because there's just something about holding an actual book, magazine, newspaper, or comic book in in your hands. Its special, it feels magic. I love the tactile connection to the art. My hope is that the magazine far surpasses the blog at its best moments. It will encompass horror and outsider fiction, deep dives into film franchises and band discographies, feature interviews with writers, directors, artists, and publishers, and will hopefully introduce you to new voices in the arts.
Thank you to everyone who continues to come back here. The blog isn't going away and will be getting more frequent updates, to finally be that supplement to a physical magazine and keep you up to date on new releases from St Rooster Books.
The first issue of Stranger With Friction will feature all new fiction and poetry, articles by Chris Cavoretto of Werewolves in Siberia and Mark Pidgeon, an interview with director Izzy Lee, a huge article on the Texas Chainsaw Massacre franchise, a profile on publisher Weirdpunk Books, the return of my old Let Us Now Praise Noise column, an all new My Heroes Have Always Been Monsters, and more! If you want to be included in issue two, read out mission statement below the banner for details.

Stranger With Friction; a Magazine of Punk, Literature, and Horror Published quarterly by St Rooster Books.

Published four times a year, Stranger With Friction is a magazine that reaches outside of St Rooster Books’ publishing orbit to artists, writers and musicians who we admire and/or are inspired by. It encompasses outsider literature, punk rock, and horror movies which have informed St Rooster Books’ mission statement from the start. Featuring essays and reviews, interviews, fiction and poetry, and artwork, Stranger With Friction is printed as an oversized, perfect bound book-zine through a print-on-demand service and available to e-readers. St Rooster Books seeks to create a unique reading experience by mixing an eclectic group of writers and artists in an entertaining and collectible riot of a combination of Slash Magazine, Juxtapoz, Rue Morgue, and the Evergreen Review.

Submissions; Works of fiction should be 2k-5k words and pay is a flat $10 plus contributor copy.

Works of non-fiction (articles, essays, reviews) should be a minimum of 1k and pay is worked out with the individual writer, depending on the length of work, max pay is about $10-$15 plus contributor copy.

If you want to advertise, full page ads are $25 and should be sent as an 8x10 B&W jpeg. Contact me by email at Tim-murr@live.com for Paypal info. 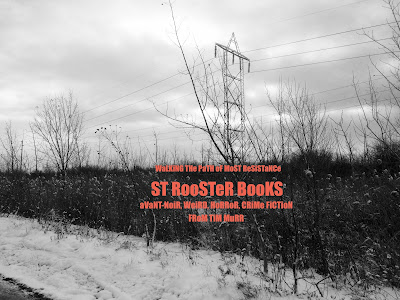 Now Available; THE BLIND DEAD RIDE OUT OF HELL; A Literary Tribute the Films of Amando de Ossorio In the early to mid 1970s, Spanish director Amando de Ossorio created a quadrology of films involving the resurrected eyeless corpses of Templar Knights aka THE BLIND DEAD. These films may have suffered from low budgets, but more than made up for it with creepy atmosphere and iconic creatures that have retained their ability to strike terror in the hearts of horror fans nearly five decades on. St Rooster Books is proud to present this literary tribute to Ossorio's beloved creations. Featuring new original stories by Paul Lubaczewski, Sam Richard, Heather Drain, Mark Zirbel, Jeremy Lowe, and Tim Murr, with an introduction by Diabolique Magazine's Jerome Reuter.