MY HEROES HAVE ALWAYS BEEN MONSTERS PART 43; WES CRAVEN 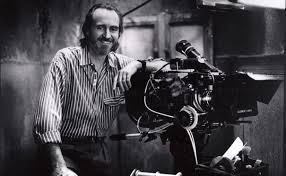 What a week this has been after losing one of cinema's great visionaries. Wes Craven has been one of the most important names in horror since the early 70's when the genre was really "growing up" behind such brave thinkers and risk takers like George Romero, Brian DePalma, Tobe Hooper, John Carpenter, and David Cronenberg. Craven's debut film Last House on the Left (1972) was as raw and visceral and terrifying as anything his contemporaries could cook up even at their peak. It's a film I've never wanted to rewatch after being completely sickened the first time.
The films that followed varied greatly (in quality as well as content) showing a smart storyteller with a wide range of interests and abilities. I can't say I like every film Craven made, but '77's The Hills Have Eyes and '88's The Serpent and the Rainbow remain favorites that have held up well over the decades. It's '84's A Nightmare on Elm Street, though, that made me a Craven fan and has been a top ten favorite horror film since the night I hid under a table and watched it in secret while my parents watched on HBO.
I didn't like Shocker, because of the third act's silliness (watch Horror Show, basically the same story, except with Bladerunner's Brion James and Pumpkinhead's Lance Henriksen, and a better ending) and I felt slighted by Scream (although the opening scene is probably the best thing Craven ever filmed). Screw those films though. Craven made some less than great movies, but the winners are so good they make up for any the shortcomings of say Deadly Friend.
Craven's intelligence, imagination, and balls have few equals and horror would be a drearier place without him. I've never read or heard an interview with the man that didn't impress me. He seemed to have a good heart as well and it was such a downer to hear that he had passed.
Thanks for a great childhood, Wes! You helped me become the writer I am and gave me films that I'll never get tired of.

...and the best scene from Deadly Friend for good measure.