GOOD BYE, MR ROMERO, I OWE YOU SO MUCH 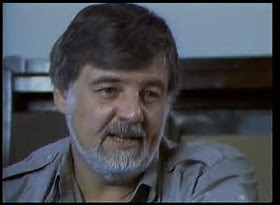 The loss of George A Romero this week is a staggering blow. As a director, he wasn't just a master of horror, he is the father of modern horror. After 1969's Night Of The Living Dead came out, horror cinema changed. His films The Crazies, Martin, Season Of The Witch, Dawn and Day of the Dead, Knightriders, Creepshow I and II, Two Evil Eyes, The Dark Half, and Monkey Shines are testament to his greatness. Some of his work is a bit uneven, he often struggled with budgets and getting distribution, but when the film arrived it did so through the vision and hard work of a man who never said die. Just days before his death we received news about his latest project, another zombie film, called Road of the Dead. It had been a long time since we had gotten a new Romero film, the last one being 2009's Survival of the Dead. Romero was no stranger to having film projects fall through, and in my opinion-and the opinion of a lot of fans-Romero never got the respect he absolutely deserved from the Hollywood establishment, despite a string of classic films that defined a genre and inspired generations of indie filmmakers.

I talked about discovering Romero's work back in "My Heroes Have Always Been Monsters Part 36" and the huge impact his Dead films had on my life as a kid trying to be a writer. At the annual Humanities Fest in 1992 I entered a short story called "Bios-Fear" that I "dead-icated" to Romero. It was, of course, a zombie story about people fleeing across the country trying to stay ahead of the zombie outbreak, many people escaping by plane to Hawaii, only to have zombies emerge from the ocean, marching on to the beach months later. I ripped off the ending from The Ghost Galleon, from the Blind Dead series, but the rest of the story was purely inspired by Romero's Dead films, I even named all the characters after actors from the three films. From that point there has always been a piece of Romero in everything I do. Cronenberg and Lynch may have had the biggest influence on me overall, but Romero was ground zero for everything I wanted to become. His spirit of independence and the heart and intelligence he infused into gory B-films, elevating them to pieces of art will always be something I lean on with every new story or book I write.

I never got to meet Romero, but his passing hurt really bad. It helped that day to be on Twitter interacting with others who were crushed by his death. We celebrated him and it was cathartic and I felt a little better at the end of the day. Hollywood may have churned out Happy Meal versions of his films instead of funding his vision, but his fans and friends knew how important he was. He was a giant who lifted others to heights they may not have achieved on their own. In these dire times we're going through right now, we could use a Romero flick to skewer our enemies and blow our minds with shocking visuals.

I woke up this morning and put on Dawn of the Dead. The film is still a striking masterpiece and a standard bearer of our genre. I've watched Dawn more than any other movie, in fact I'm going to watch it again tomorrow when I show it to my kids. I think it's an important enough film and they're old enough to handle it. I hope it moves them the same way it moved me.

Peace and love to your spirit, George.

Email ThisBlogThis!Share to TwitterShare to FacebookShare to Pinterest
Labels: creepshow, dawn of the dead, day of the dead, george romero, living dead, night of the living dead, tales from the darkside, two evil eyes, zombie 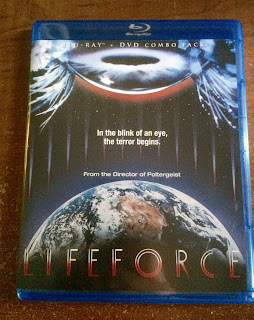 Based on the 1976 novel, The Space Vampires, by Colin Wilson, Lifeforce (1985)was the first of a three picture deal Tobe Hooper had signed with Canon Films. It was also the follow up to his Steven Spielberg collaboration Poltergeist (1982). Hooper had made a name for himself with the notorious 1973 film The Texas Chainsaw Massacre, 77's Eaten Alive, and 81's The Funhouse. Poltergeist, despite it's PG rating was a phenomenal film that split the difference between Spielberg and Hooper's aesthetics, giving us the goriest, scariest kid friendly film I've ever seen. Hooper was next set to tackle the living dead Return Of The Living Dead, which would have been called Tobe Hooper's Return Of The Living Dead, but left the project when the Canon deal came through. Writer Dan O'Bannon (who wrote the screenplay and wrote Alien) was brought on to direct and was also tapped by Hooper to adapt The Space Vampires.

Though it was a critical and financial bomb at the time, Lifeforce is an ambitious film with a sturdy cast, really good, if not great special effects, and a truckload of memorable moments. For me, it's only second to
The Texas Chainsaw Massacre Part 2 as Hooper's most enjoyable film to watch. There are apparently some call backs to Hammer Films' Quatermass films, but I'm not familiar with those and can't speak to that, but I did catch some nods to Lifeforce in this summer's Universal The Mummy. Also, we've seen the idea of vampires from space before with Vampirella and Mario Bava's Planet Of The Vampires (which was one of the films that inspired O'Bannon's Alien). Lifeforce and Planet Of The Vampires would make an amazing double feature, by the way. 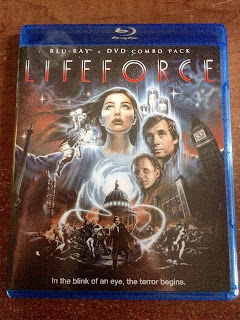 The story is about the space shuttle Churchill intercepting Haley's Comet to study it and discovering a 150 mile long spacecraft that's full of bat-like creatures and three pods each containing a nude humanoid, one female, two males. The pods are brought back on to the Churchill and thirty days later the Columbia is sent to rescue the Churchill which is drifting off course back to earth with no communications. The Columbia crew finds the ship gutted by fire with only the three pods remaining intact and bring them back to earth for study. As the original title suggests, space vampire wackiness ensues.

If you haven't seen Lifeforce, Scream Factory's Blu-ray is an absolute treat and I don't say that lightly. The colors and visual effects really pop in this restoration. As sci-fi horror flicks go, it tends to be a bit more bonkers than scary, but that just makes it more fun. O'Bannon's script is solid, and if anyone knows sci-fi horror, it's the guy that wrote frigging Alien! As a director, at least up to 93's Night Terrors, Hooper had been really solid and consistent, w 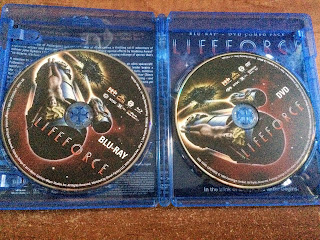 orking in film and television. His filmography may not be as distinguished as John Carpenter's, but I think Hooper's less loved films, particularly Lifeforce and Invaders From Mars is due a reassessment. Even TCM2 tends to get some undue hate to this day.
Lifeforce stars Steven Railsback, Peter Firth, Frank Finlay, and Patrick Stewart, but Mathilda May owns the film. Her bold, fully nude performance is without a doubt the centerpiece of the film. Her background in dance gave her the ability to move in a way that communicates both threat and allure. Lifeforce was her first feature and she barely spoke English, but you'd never know from her confident and commanding performance.

John Dykstra did the special effects, mixing puppetry, animation, and miniatures. Sometimes the effects look a bit dated, but no less charming and still beat out most CGI by a country mile.  Friday The 13th's Henry Mancini did the score with additional music from 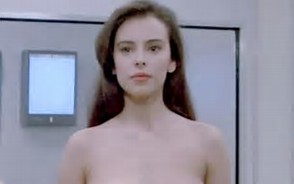 Michael Kamen (The Dead Zone, X-Men). I haven't read Wilson's novel, but apparently he hated the film. The Canon group was very excited about the project though and gave Hooper $25 million, in hopes of elevating the film above their usual low budget fare and getting the film taken seriously. Unfortunately, this wasn't meant to be as critics and fans didn't get it and didn't care and the film flopped, not even making back half its budget. But like Halloween III, Lifeforce is simply too good of a film to be relegated to the dustbin of history and has been kept alive by a steady cult following. Any flaws the film has are minor compared to its many strengths.