MY HEROES HAVE ALWAYS BEEN MONSTERS PART 39; JASON VORHEES (spoilers in effect) 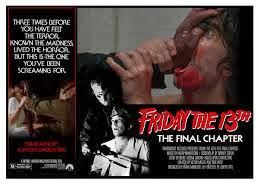 There was a general fear of the dark, of the unknown, but my childhood fear never had a face until that cursed day I entered our trailer after playing outside in time to catch the TV ad for the latest Friday The 13th, which I believe would have been Part 4; The Final Chapter. 1984, third grade, eight years old, unprepared. The trailer made my blood run cold. Just the sight of that hockey mask. I didn't sleep for a week.
At that point I didn't know much outside of my Remco (Mego style figures) Frankenstein and Mummy toys and Scooby Doo. I remember the ads for Fade To Black and Alligator ruining many a night's sleep, but nothing went straight to the very core of my fear as Jason Vorhees had. And it would be years before I'd even see one of the Friday films! The '80's slasher boom shattered my little small town world that had once seemed so safe.
My understanding of the origins of the Friday franchise is that producer Sean Cunningham saw John Carpenter's Halloween and wanted to do the same thing. (Cunningham had already produced Wes Craven's sick and shocking debut Last House on the Left.) Cunningham wrote the script with Victor Miller and crafted a fairly decent horror flick that could almost pass as an Italian giallo (compare it to Mario Bava's Bay of Blood).
The story goes that a young boy named Jason drowned at summer camp because the counselors were fooling around instead of watching him. After that the camp appears cursed, with murders, fires, and 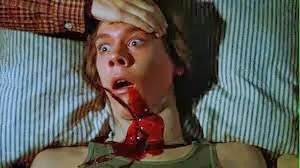 water poisoning. Jump ahead a number of years and a few brave souls are once again trying to reopen Camp Blood. Then the bodies start piling up and eventually we see the killer is the long grieving mother of Jason.
The first Friday is a little more nuanced than the chapters that follow, which tend to have a tried and true pattern despite whatever gimmick the directors and writers may throw at Jason. Regardless, though, of how many horny teenagers have been lined up for Jason to hack through, the series remains the most popular of all the slasher franchises. Out earning A Nightmare on Elm Street and Halloween and Jason has wracked up a far higher body count than any of his masked counterparts. What the hell is the appeal?
Let's be honest; not all the sequels are equal. Chapters 4 and 6 are definite high points while 8 (ugh, Jason Takes Manhattan) is one of the worst horror films I've ever seen, despite a solid Jason 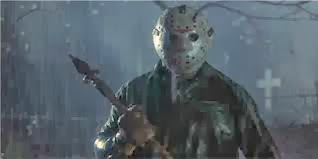 performance from Kane Hodder.  Other entries rely on some kind of gimmick, like telekinesis, body jumping, or sending the old boy into space. It doesn't matter what the 'plot' of any of the films may be, at some point they all become body count movies, where we go from one clever/inventive kill to another. Regardless of which actor is behind the mask Jason is pretty much always good, but the quality of the films generally hinges on the other actors. Which is what makes 1, 4, and 6 immediately better than most of the rest of the series.
When we finally got the long rumored Freddy vs. Jason it was a great film that brought out the best in both franchises, even if it was a bit too slick/Scream-like. And the 2009 remake crammed the three original films into a satisfying thrill ride with one of the best Jason's we've ever seen.
So what sets Friday The 13th apart from other slasher films? What makes Jason more interesting than Michael Myers, Leatherface, or Freddy Kreuger? Let's start with character. Of the four psychos I just named, none are not scary. They all have a unique spin on what makes them frightening, with motivation that is their own. Myers is frightening because he moves like a nightmare; impossibly slow, yet always right behind you and everywhere at once. Leatherface is simply helping to protect and feed 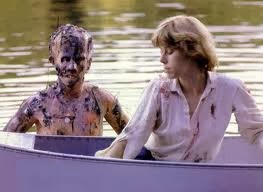 his family. I question how 'evil' the character actually is. He's a man-child doing what he's told and what he believes is right. Freddy is probably the most insidious of the bunch. Gleefully evil, embracing the role of the monster with gusto. The bastard son of a thousand maniacs was a child murdering monster even before the parents in town burned him alive. His cursed soul returned to continue murdering kids in their dreams. There's no humanity in Freddy, but he's in total control of his actions, where as Myers is such a blank you can't be sure what's driving him forward.
Jason is the most complicated of the bunch. It doesn't help that the franchise is filthy with continuity problems and lapses in logic that are hard to ignore. When we first see Jason in the first film he's a dead little boy, but a couple months later in part 2 he's a hulking man wearing a sack over his head. In 1 his mother is committing the murders because her son drowned, later Jason is killing because he saw his mother beheaded. And there is no explanation given. But that's fine! The first four films happen in a relatively short time span, 3 and 4 within about 4 days, I think. There's a few years before the events of 5 and about seven between 4 and 6, where we see Jason dead and buried, before accidentally being brought 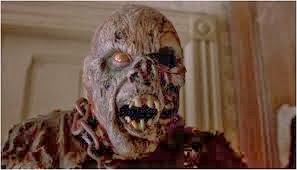 back to life-starting the 'Zombie Jason era'. After that any sort of timeline becomes irrelevant and the series becomes, despite some interesting bits here and there, little more than a cash in. Neither 7 or 8 builds on the Jason mythos. Having Jason go up against a telekinetic girl (you know, like Carrie or Jean Grey) was cool, but the film as a whole was a lackluster affair. The aforementioned 8, Jason Takes Manhattan, is a waste of film adding a confusing bit at the end where we see Jason melting and becoming the little drowned Jason before fully dissipating. 9, Jason Goes To Hell, introduces a whole new explanation for everything that doesn't jive with ANYTHING that came before. What we thought of as Jason isn't Jason, but just meat suits he wears. The real Jason is a small legless demon that jumps from body to body. This only works if you plug this ret-con origin story in between 1 and 2 and have the hulking Jason born out of the body of his decapitated mother. (We see her head in 2, but we never see her body again.) The problem is that Jason clearly has the same body for every film up until 9. Director Todd Farmer got back to basics with Jason X, except where Jason is frozen and wakes up in the future in space. It's a cool idea in a painfully low budget and awful looking movie that's fairly maligned. It's certainly better than the Manhattan. The bad special effects are what really kills X, not the concept (and why, if you're a fan and you accept EVERYTHING ELSE in the series, is frozen in space where you draw the line? If Jason is unkillable he will wind up in the future eventually right?) The last film of the franchise is the Nightmare on Elm Street crossover that picks up after Jason Goes To Hell. It's a satisfying culmination for both series before we get the remakes. But it does little to evolve the characters of Jason or Freddy.
We the viewers are left to fill in a lot of holes. I think for many people the Friday films are like roller coasters, fun to ride with nothing to ponder. But Jason has always held a fascination for me and I've 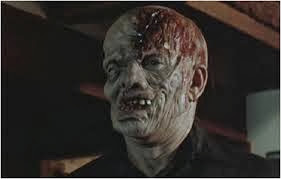 always wanted a film that really delves into what is making Jason go. Based on his behavior throughout the series Jason sometimes appears to still be the little boy who drowned who is now trapped in an engine of revenge, see part 2 and 4 (and take into account that he kills no children in 6, even when they've been served up to him like chicken cutlets and in 4 young Tommy would have been an easier victim but he chooses to go after Trish instead). His humanity being his achilles heel in at least two films and his transition from dead child to unstoppable full grown killer make for a delicious mystery and a huge missed opportunity for every writer and director who ever took on the character. Jason's drowning is ground zero for the whole series. It provides motivation, but only thinly. Mrs Vorhees isn't the first mother to lose a child, but she is the only one to go on a decades long killing spree. The supernatural is ever present but unacknowledged for almost the entire series until it is suddenly addressed in 9 with the introduction of the Necronomicon (you know, from Evil Dead?). Was Mrs Vorhees playing with powers beyond her control that that trapped her dead son's soul inside this unstoppable killer? Makes sense, especially given the brief glimpses of humanity we see in Jason in 2 and 4. But clearly the revenge machine is in full control for the majority of the series-assuming revenge is his motivation or 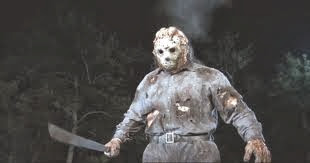 that he has motivation at all. As we see in Freddy vs. Jason, he's not a mindless killer. He's still listening to his mother's voice from beyond the grave, continuing her command to punish-punish them all. So there is still a psychology and depth to the character that the lesser entries in the series betrays.
It probably sounds like what I love about the Friday series is the potential and that's true, but these are fun films, even the 'bad' ones have a certain charm that begs re-viewings (except 8). Also, I love a sympathetic monster and I see Jason as a sort of Frankenstein monster-not born evil, but forced into it by circumstances beyond his control.
Friday the 13th suffers due to too many cooks in the kitchen and no long term direction from the beginning. The remake is a chance to start fresh and tighten the narrative and time will tell if this actually happens. At this point the next film is in some stage of preproduction. Hopefully Derek Mears (F13 '09) will be back behind the mask and rather than another retread of the previous entries the series strike out in a new direction.


Keep watching the sky, nerds!
Posted by Tim Murr at 2:04 PM No comments:

LET THE JACK O'LANTERNS BURN TILL THEY ROT! 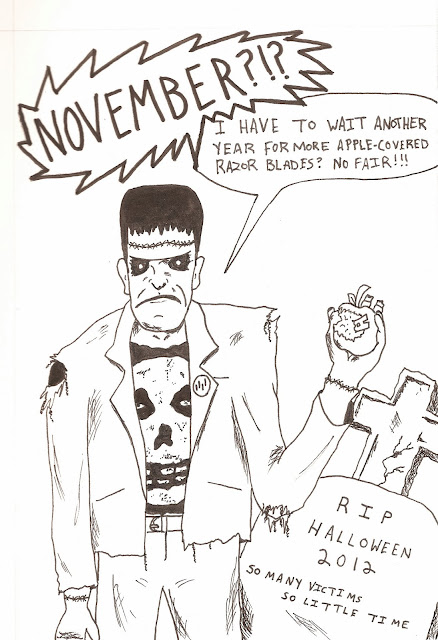 King Vulture 2012
(Yea, I know. This is from last year, but King Vulture has been busy and didn't get a new one done!)