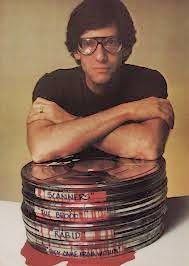 As I've said on a number of occasions, David Cronenberg is my hero. I love his films, regardless of era, regardless of subject. I saw The Brood on USA when I was a kid and it scared the piss out of me. Later I got Scanners from one of the little video stores, by then there were two sequels (that Cronenberg had nothing to do with). The Fly and Naked Lunch blew my mind and then I saw Videdrome.
My writing rarely reflected much of a Cronenbergian influence, but being floored by each of his movies definitely drove me to be better. My latest e-novella Conspiracy Of Birds couldn't exist without his inspiration (along with my love of Dario Argento's films).
I just rewatched The Brood for the first time in years, with my wife who'd never seen it. It was such a great experience to come back to my first Cronenberg film after so long, seeing it on a restored (but bare bones) DVD and seeing it in a whole new light and still being just as moved by the experience. Like I said, the movie scared the piss out of me the first time and I'll be damned if it's not still disturbing.
But what's my favorite Cronenberg film? I cautiously say Scanners. It may not be as conceptually strong as Videdrome or The Fly, but it has an emotional edge over the other films for me. It was the one I rented over and over again. I liked the urban exploitation X-Men feel of it. Then again Videodrome is endlessly quotable and The Fly is, well, have you seen The Fly? It's a masterpiece of gore and bio- philosophical horror. Then there are the newer films, Cosmopolis, Eastern Promises, and History of Violence? And what about the mid period, Dead Ringers, Crash, Spider..?
I think Cronenberg's body of work has been far more consistent than many of his peers. It's a career that deserves a multi-volume examination.
So, dear fiends...what's your favorite Cronenberg film? 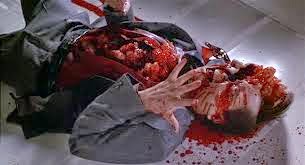 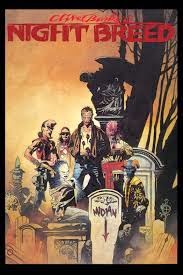 Coming from writers Clive Barker and Marc Andreyko and artist Piotr Kowlaski comes the new comic series based on Barker's novella Cabal and the 1990 film. Boom! Studios (Hellraiser, Adventure Time) will unleash the first issue this month.
I'm waiting to see if this is a continuation of the original story or a new adaptation. Either way, I'm in. Boom!'s Hellraiser books have been fantastic and have totally redeemed the franchise from the deplorable sequels. I'm an even bigger fan of Cabal/Nightbreed and loved the comics from the 90's and while eagerly awaiting the new Nightbreed Cabal Cut on Blu Ray to be released this is very welcome news.
Nightbreed is about a secret city of monsters that hide away from the world of man. Their secret is revealed when a psychiatrist with a twisted secret tricks one of his patients is a vicious serial killer, setting in motion a series of events that put the Nightbreed in a desperate situation.
Now if we can just get Rawhead Rex back into comics..!
Posted by Tim Murr at 1:18 PM No comments:

MY HEROES HAVE ALWAYS BEEN MONSTERS PART 41...THE 90's; INDUSTRIAL MUSIC AND COMICS

MURDER INC.-"MURDER INC."
I was collecting every comic connected to Clive Barker I could find (Hellraiser, Nightbreed, NOTLD; London, his Marvel series, like Saint Sinner) as well as Ashes, Dead World, Faust; Love Of The Damned, The Crow, Gore Shriek, Zombie War, etc. I had gotten into horror influenced metal with Alice Cooper and Iron Maiden in middle school, then White Zombie's La Sexorcito; Devil Music 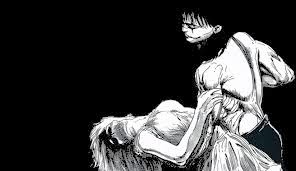 Volume 1 and Misfits Collection and Walk Among Us in high school. The thing about those four groups is that they are all awesome and fun, but a bit cartoonish and not really scary.
Scary music came into my life via my friend Kevin late in my freshmen year. Kevin was a little older and had his drivers license and a car. He'd frequently drive out to Knoxville (our big city) and come back with music we'd never heard of. One day he put a cassette in my hand and said, "If you can get through the first track you'll love this."

The first track was a twelve minute endurance test called The Love Serenade (I Hate You). The band was called Pigface and the album was called Welcome To Mexico...Asshole. This was my introduction to industrial music. That cassette lived in my walkman for days only being traded out with another tape I was loaned that day, The Words and Music of Lou Reed; The Best of the Velvet Underground. Taken together that was kind of a crazy experience since the wildest music I had owned up to that point was Guns and Roses.

The thing I loved about industrial bands was the emotional, political, sexual, religious, and social extremes that many of the best bands were willing to go to. Listening to Pigface, Nine Inch Nails, Ministry, Murder Inc, Revolting Cocks, Front 242, Trust Obey, and Skinny Puppy was like a mash up of Albert Camus' The Stranger, Clive Barker's Hellraiser, William Gibson's Neuromancer, and William Burrough's Naked Lunch mashed up into a musical genre. The music was an electro/mechanical alchemy of punk and metal and often more sonically adventurous than either.
TRUST OBEY-"HANDS OF FIRE"
While a lot of bands may not have had an explicit connection to horror, they were able to convey a horrific world view through their lyrics, album covers, videos, and an overall sense of dread the music created. Ministry has two great examples of this. NWO is political and JUST ONE FIX is about heroin (and features Burroughs), but both feel like short horror films.
MINISTRY-"JUST ONE FIX"
Then there's Skinny Puppy's anti-vivisection video. NSFW...
SKINNY PUPPY-"TESTURE" 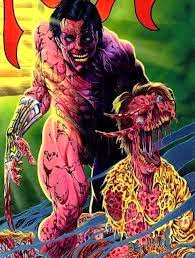 That's more horrific than most slasher films. It was easy to sit up all night writing horror stories with this music on and it informed and broadened my world view at a crucial time in my youth where I was heading into adulthood in a small town and had very little exposure to what the world had in store for me (Punk rock was doing the same for me at roughly the same time). I was becoming politically aware and also dealing with heavy depression from growing up in a broken home which was manifesting as anger and hate and a pessimism about the future. Nine Inch Nails' PRETTY HATE MACHINE was a good soundtrack for that.
The world of underground horror comics was opened up to me during my freshmen year of high school also, thanks to an issue of Fangoria that featured an article about David Quinn and Tim Vigil's FAUST; LOVE OF THE DAMNED and an issue of Comic Scene featuring an article about James O'Barr's THE CROW (note; actual cover dates are lost to me and I don't remember which came first). I've told the story in an earlier post about how my friend and I went to our second comic con at 14 looking desperately at every booth for issues of Faust and having fully negative reactions from the vendors. These guys were seriously not cool with us or that comic. "No! I don't even carry it in my store. It's sick!" Finally, there was one booth that had four issues and we each bought two and I found issue 2 of The Crow and some Dark Horse ALIENS comics. When we were old enough to drive, we'd spend whole days scouring thrift shops, used book stores, and the one local comic shop looking for more comics like these and that's when we discovered the amazing DEAD WORLD and started regularly reading the HEAVY METAL.
This was a great time for indie comics, especially with the exodus of talent out of Marvel to Image and the (shudder) Azreal era of Batman. My favorite comic book, X-Men, went into the toilet with Chris Claremont's departure. It would be years before I bought a comic from the big two again and Image quickly started to feel like a screw job, with blatent X-Men clone books, poorly written scripts, and late books. I lived for small press black and white comics.
Industrial bands, comic creators, authors of splatter and cyber punk books were all influencing each other and sometimes collided, like in the film adaptation of The Crow from director Alex Proyas, which featured a cameo from My Life With The Thrill Kill Kult, a screen play from splatter punk writer David Schow, and had an incredibly hip soundtrack of alternative, industrial, and metal bands, including Nine Inch Nails covering Joy Division.

NINE INCH NAILS-"DEAD SOULS"
At some point Industrial merged with goth and theatrical metal and a lot of it started to sound the same. Bands started sounding the same and there was little innovation and even less to be excited about. The bands that were good, mostly stayed good, if they stayed together, or went off and started new projects that continued their evolution as artists. For me, going backwards to the roots of Industrial was far more interesting. Discovering groups like Big Black, Suicide, Cabaret Voltaire, Killing Joke, The Swans, and Throbbing Gristle have expanded my life's soundtrack and given me plenty of inspiration to write with.
Honestly, with films like I Know What You Did Last Summer, Final Destination, and the Scream sequels coming out like Twinkies on a conveyor belt, it took a while for my faith in modern horror to be re-established. Really, it's been the last ten years where I felt like horror had finally started reaching for the higher artistic standards that other art forms have long since embraced.
THROBBING GRISTLE-"SOMETHING CAME OVER ME"
Keep watching the sky, nerds!
Posted by Tim Murr at 1:04 PM No comments: