KING VULTURE'S SOUND ATTACK; YOUR CAR IS AN ABATTOIR OF LOVE MIX 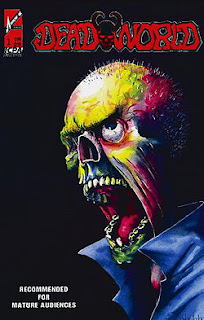 Back in high school, my friend Jase and I would spend many a weekend driving around scouring the used book stores and thrift shops. One Saturday we found a treasure trove of black and white indie comics, mostly horror; The main find though, was Deadworld. There were about four five issues of the original twenty-six issue run, some from Arrow Comics and some from Caliber Comics.

We were hooked by Deadworld's twist on the zombie genre. You have a gateway to another world, some four armed eyeless monsters, some intelligent zombies, tight writing, and killer artwork. Finding more Deadworld became as high of a priority for us as another black and white horror indie we'd been chasing for a couple of years, Faust; Love Of The Damned.

Before you roll your eyes at the notion of another zombie anything, be aware that Deadworld launched in 1987 and didn't just follow the George Romero model of zombie storytelling, like nearly every other zombie novel, movie, TV show, or comic. The apocalypse of Deadworld has a supernatural origin; a gateway has opened and the walking dead, led by some intelligent zombies, invade our planet. The gateway was only opened temporarily and the main villain, King Zombie, wants to reopen it permanently and take over our world. On the human side, you've got a group of friends trying to stay a step ahead of King Zombie and his army.

There are some very uncomfortable similarities to Robert Kirkman's Walking Dead, here's series co-creator, Gary Reed talking about them to Comic Book Resources (click the link for the full interview);
"Well, I've never read the comics but have caught some of the TV show. My general impression of the show is that it's a little slow but it seems pretty interesting. I actually get asked a lot about it not just because of the zombie worlds but because the events that I've seen in "Walking Dead" are very similar to a lot of stuff that happened in the original "Deadworld" series. I mean, I don't want to be that guy that screams "rip-off" like so many others, but there are a number of similarities... the guy with the hand cut off and blade attached, the sword wielding female with chained up followers, a wife named Laura and a son named Carl, a religious family that seems unaffected by zombies, these are just some. I really don't think about it too much unless someone asks and I do get lots of advice from many people about going after them. I don't really think about it as I'm so busy and I have to determine if I should think about it more. The current "Deadworld" storylines are so far removed that it's hard to look way back in the past. I guess I need to give it some more thought and actually explore it in more detail about any kind of connection."

More important than the similarities, though, are the differences. Walking Dead relies on the Romero model of a vague cause for the zombie outbreak. Reed and Vincent Locke took Romero's influence and gave it more depth and gave their outbreak an origin. We've seen talking zombies in Return Of the Living Dead, but we've never seen anything like King Zombie; imagine a zombie Lemmy Kilmeister, from Motorhead, riding a Harley and all the bad-assness that implies! Ruthless, sarcastic, and pure evil straight to his black, shriveled heart. Deadworld has also done a lot more evolving and at a much faster pace. And though the publishing became sporadic in the 1990s, Deadworld is still going, making it by far the longest running zombie comic, always delivering both quality writing and artwork.

Speaking of the art, series co-creator Vincent Locke's iconic artwork has been seen in the graphic novel A History Of Violence as well as on death metal album covers, including Cannibal Corpse. His unique style made Deadworld extra creepy and the violence more shocking. And though he moved on to other projects long ago, he has had some very good and worthy successors with Dalibor Talijic, Sami Makkonen, and Mark Bloodworth.

Cliber Comics also published some Deadworld related one shots that were unrelated to the main story, one of which, Roadkill, is basically a prose short story in a comic book format with beautiful full page black and white paintings by Dave Dorman. Del Stone Jr wrote the story involving a group of neo-Nazis trying to reclaim America from the zombies, but runs into a hero smart zombie, named Hitch. (Hitch returned in Heavy Metal's Monster Massacre).

In terms of story, depth, quality, and gore Deadworld sets a high water mark, not just in comics, but in the horror genre. If you're sick of the Walking Dead's meandering, go find the comic that did it first and better. 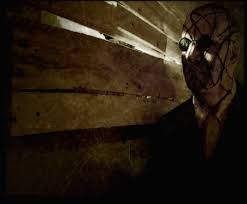 By now you've probably noticed a lot of people making scathing, misspelled diatribes against FX artist/writer/director Gary Tunnicliffe in regards to the announcement that he is helming a new Hellraiser film. Also Doug Bradley will once again not be Pinhead. Take a deep breath. Filming has just started and there has been no footage to pass judgement over. (By the way, the new subtitle for this tenth entry is Judgement.)
Every time I see a post about the new Hellraiser film on social media it's followed by comments seething with anger, people convinced without a shred of evidence that this will be the worst sequel of all. I ask myself, why, children, why are you so angry? Yes, Revelations sucked. It was a hack job to keep the Hellraiser rights within Dimension's control. And Hellworld was almost as bad, but to say the franchise hasn't been good since the first or second film is at best a matter of a opinion and at worst a lie.
Considering that about half of the sequels were based on non-Hellraiser scripts with Pinhead plugged in and they still wound up watchable, dare I say enjoyable, is somewhat miraculous. Story wise, everything post Bloodlines and up to Hellworld mostly suffered from low budgets. There were some story flaws, true, and the films did little to advance the actual story that began with the first film. Hellraiser is not the first franchise to be guilty of such sin though. Look at every Friday the 13th film after Jason Lives. As much as I love F13, most Hellraisers after Bloodlines are better than most Fridays after Jason Lives. Strangely though, a steaming pile of dung like Jason Takes Manhattan gets more love than Deader. Has Hellraiser simply become fandom's punching bag?
Let's compare Hellraiser with some other big franchises; Halloween lost it's way after part six and Texas Chainsaw after part three. A Nightmare On Elm Street reached it's peak with The Dream Warriors and while it kept the story intact for three more sequels it suffered from the law of diminishing returns. All five of the franchises have suffered from bad sequels and/or remakes of wildly varying quality. They all also suffer from a case of arrested development. None of them have ever really taken a chance with a major reinvention of the franchise or ever evolved the story. (Wes Craven's A New Nightmare took a stab at this, but didn't recharge the franchise so much as it gave fans a chance to see Nancy [Heather Langenkamp] take on Freddy one more time.)
Some of the comments that have been echoed the most have been "No Doug Bradley, no Hellraiser" or "No Clive Barker, no Hellraisr". That's as silly as "No Ian Fleming, no Bond", or "No Bob Kane, no Batman", or worse, "No Michael Keaton, no Batman". Sometimes a franchise outgrows it's creator and sometimes the creator has better things to do than churn out sequel after sequel. These childish temper tantrums at writers and directors are as unhealthy as cigarettes for horror as a genre. What is a director? An artist. A director creates. No director sets out to make a bad film (ok, most don't). Even if it's for a pay day more than a creative impetus, no director wants to be associated with a bad film.
I don't expect Judgement to outshine the first two Hellraisers, but I also don't expect it to suck. After everything I've read from or about Gary Tunnicliffe I believe he has embarked on a journey to create a really good Hellraiser film. He's not just a hired gun keeping the rights in Dimension's hands, he's a fan and has worked on the FX for more than half the films in the franchise. So instead of throwing Gary under the bus for attempting what none of us could get done, lets be supportive and send a message to Dimension that we care about Hellraiser and demand quality films from them.
Posted by Tim Murr at 7:17 AM No comments: